African Queen - From Goisern to Gombe 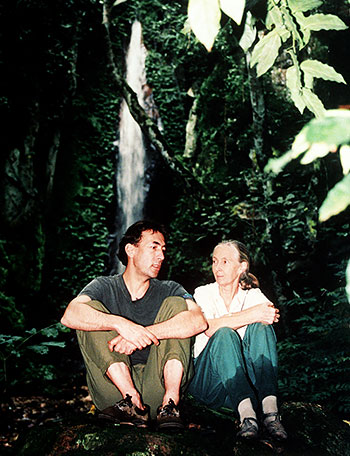 "What unites us is the reverence for creation, the belief in the wonderful in life and the knowledge that we have inexhaustible spiritual and human resources, which we should however use creatively and cautiously. Fatalism is foreign to us both."

Hubert von Goisern describes effectively the singer's friendly relationship with the world famous behavioural research scientist Jane Goodall. But it is a quotation which also stood right at the start of an idea, which let Hubert von Goisern travel to Gombe in Tanzania.

Jane Goodall, born 1934 in London, became famous through her life and work with the wild chimpanzees in the mountains of Gombe. Her scientific experiences however also led her in recent years to become an engaged fighter for a respectful and holistic approach to life. An at first glance surprising affinity led her to a close friendship between Jane Goodall and Hubert von Goisern. Since then both of them have carried with them the intention of realising this relationship in a film.

Story of a friendship

Hans-Peter Stauber calls his documentary about this friendship "African Queen". But it is also a film which goes beyond this friendship, documenting the grand mountain landscape of Gombe at the Tanganyika Lake in Tanzania, with its people, flora and fauna.

For 16 days of filming Hubert von Goisern and the film team, with director Hans-Peter Stauber and the two cameramen Tone Mathis and Volkmar Voitl, worked in the mountains of Gombe, where Jane Goodall's work began in 1960. One of the peaks has been named "Jane's Peak" in Goodall's honour. It is the spot in Gombe National Park where Jane Goodall fostered - and still fosters - the closest contact with her chimpanzees. These relationships have been strikingly documented for the film.

However the programme also leads back to the history of the Black Continent. The team filmed in Ujiji, where the famous meeting between the English missionary and Africa researcher Dr. David Livingstone and the journalist Henry Morton Stanley took place in 1871. Another filming location was the steamboat "Liemba", which was brought across land to Tanganyika Lake by the German East Africa troops before the First World War and worked there as the "Graf von Götzen" until it was sunk by Belgian troops in the First World War.

The journey is narrated in diary form by Hubert von Goisern - and he is also the one who wrote the music for this documentary.