Hubert von Goisern is made "Ambassador of Good Taste" 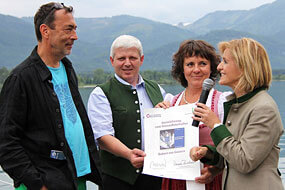 Traditional Austrian foods are not just a culinary cultural asset, but are also inextricably linked with the country. The Austrian Federal Ministry of Agriculture, Forestry, Environment and Water Management's initiative of "Regions of Good Taste" has stood for regionalism, authenticity and seasonality since its inception in 2005. Last week Hubert von Goisern became patron of a flagship of Austrian quality production - the Salzkammergut Region of Good Taste - and was also named "Ambassador of Good Taste" for the future Salzkammergut wild caught fish by Chairwoman of the Austrian Regions of Good Taste, Margareta Reichsthaler.

An ambassador for fish and fishing 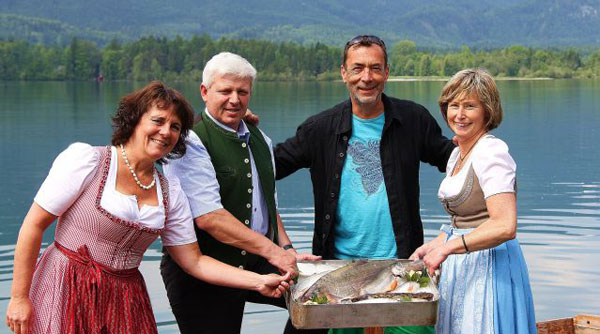 ST. WOLFGANG. Wolfgangsee, Traunsee, Fuschlsee, Hallstättersee and Altausseersee –it is from these bodies of water that the species of fish will be caught, which in future will be marketed by select fishermen and gastronomes under the name "Salzkammergut wild caught fish".

[...] On Wednesday the trademark "Salzkammergut reinanke" was expanded to cover numerous more species of fish, becoming "Salzkammergut wild caught fish" and was officially presented by Heide Kühnel. Together with Chairwoman of the Austrian Regions of Good Taste Margareta Reichsthaler she also named a famous personality as official "ambassador of delight": Hubert von Goisern.

The 59-year-old singer and musician is a passionate angler and learned his hobby on courses, including one led by Nikolaus Höplinger. "I'm not a hunter, because it's crashing about and that's too loud for me", Hubert says. "Fishing is quiet, but it's still a form of hunting." He doesn't give away any fish he's caught, he shares it with friends and eats it himself. "Because if I've caught it, I want to have something of it."

Hubert's simple and tasty recipe: "as far as I'm concerned, there's only one way to prepare fish: lots of butter and a good bit of salt." He turns the bonier whiting into soup, says Hubert von Goisern. Which is his favourite fish, Heide Kühnel wants to know. The artist laughs mischievously: "The one that bites". More concretely he reckons on: burbot, char, reinanke, trout and pike.