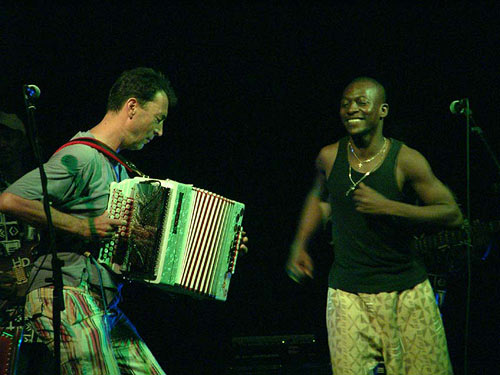 Bad Ischl / Bil Aka Kora & Djongo System formed the start for this year's summer concerts from the cultural institute "Der Keller". Bil Aka Kora, who comes from Burkina Faso (West Africa) is among the most successful musicians of his country. Inspired by the rhythm of the Kassena, a people who live in Ghana and Burkina Faso, with melodic and powerful pieces and partly a very melancholic touch Bil Aka Kora gives a view into the music of these people. But the Kassena do not only have a very special music, a dance called "Djongo" is also famous.

As well as in the south of Burkina Faso, the Kassena are also indigenous to the north of Ghana and famous for their architecture, and the elaborate masks. The group around Bil Aka Kora combines traditional instruments like the bendrés, lunga, gulu and siwa with keyboard, guitar and drums. One of the high points of the evening in the Lehàrtheater: the unexpected guest appearance from Hubert von Goisern, who had already been able to make the acquaintance of Bil Aka Kora in Ouagadougou, the capital of Burkina Faso, since there it came to a spontaneous ensemble playing.

Before the concert in Bad Ischl, the two men appeared together in the Böhmischer Prater in Vienna at the Weltkulturfest, which was organised by "Kulturen in Bewegung" and took place against the background of connecting people. Incidentally, Burkina Faso is the main country of the Austrian development cooperation, the beginning of the cooperation reaches back to the 60s. 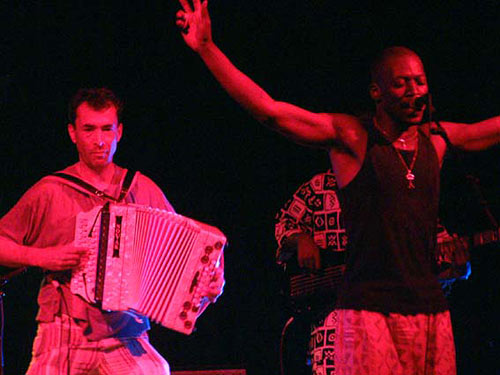 More than 12,000 enthusiastic guests celebrated a festival on the Whitsun weekend in the Böhmischer Prater, as Favoriten has rarely seen. Top grade music and dance acts in Tivoli and at the Spenglerwirt provided for a unique atmosphere in subtropical temperatures. Unanimous opinion: we look forward to next year.

[...] It is difficult to single out individuals from the wealth of impressive concerts and acts at Moving Cultures Favoriten. The Spenglerwirt stage offered the ideal area for the first high point on Saturday. That was without a doubt the fascinating appearance from the Haitian singer Marlene Dorcena, who cast the audience under her spell from the first bar. On Whit Sunday, Bil Aka Kora from Burkina Faso and Hubert von Goisern served up a musical delicacy of special class. Ideal lead-in to the closing concert from Oliver Mtukudzi: the star from Zimbabwe gave impressive proof of his ability after a ten year absence from Austria. The nighttime atmosphere over the Tivoli, in front of the lit-up ferris wheel and half moon covered in cloud, in addition the incomparable Tuku Beat Mtukudzis let a good many people believe in another world. All those who were there will look back at the two days in the Böhmischer Prater with pleasure and hopefully remember the slogan of the celebration: Another world is possible.