FLOW - a rock opera by Severin Trogbacher and Dominik Barta

We know that good music is made in Upper Austria. And that's been the case for a long time. There's something special waiting in the wings in St. Florian though.

To mark the tenth anniversary of Saint Florian's patronage of Upper Austria, a tailor-made rock opera was composed for him - and not by just anybody: St. Florian musician Severin Trogbacher (familiar as guitarist for Hubert von Goisern and Konstantin Wecker) wrote FLOW together with the Upper Austrian writer Dominik Barta.

"For us it was all about telling the Passion of St. Florian - which as we all know did not pan out well – as a story about friendship and civil courage", says Trogbacher.

In June 2014 FLOW was presented to a thrilled audience in two sold out performances at the Florianhalle. The youth choir Pappalatur, a collaborative project between Landesmusikschule St. Florian and St. Florian Monastery, brought the spectacle to the stage together with a top class band and orchestra. In November 2014 the innovative project was awarded the AVISO prize from the University of Music and Performing Arts, Vienna.

FLOW is finally being released on 4th May, having been recorded in Studio Weinberg and in St. Florian with A-Team of the local music scene: the 70 children from Pappalatur being supported by the legendary Spring String Quartett and music maestros such as Hans-Jürgen Bart (Parov Stelar) and Stephan Kondert (S.K. Invitational).

Rich symphonic strings, sharply accentuated with brass fanfares, contribute to a jazz-rock harmonic structure, in which Trogbacher's homeland can be clearly heard. The singing - inspired by the madrigal comedy tradition of the Renaissance - doesn't come from soloists, but from the choir. That the children take on this task really allows the intensive lyrics from the pen of Dominik Barta come into their own.
"I believe we have succeeded in recording music that effortlessly defies the boundaries of age and styles. Only those expecting a CD of "children's songs" will be disappointed", the composer jokes.

FLOW ist available from 4th May, St. Florian's Day, at selected retailers and at Amazon, iTunes and www.severintrogbacher.com. 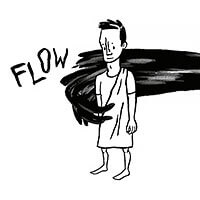