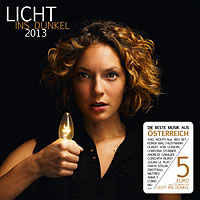 Stars from across the Austrian music business have made contributions to the album - from Hubert von Goisern to Christina Stürmer, from Julian Le Play to Parov Stelar, from Zweitfrau to Wilfried and many more. Also released exclusively on this CD is the song My Lights, written specially for Licht ins Dunkel and performed by Axel Wolph feat. Ben Sky.

For every copy of the charity album bought or downloaded, €5 goes straight to Licht ins Dunkel.