The Ö1 Christmas Quiz for "Licht ins Dunkel" live from the RadioKulturhaus.
Presented by Doris Glaser and Bernhard Fellinger. 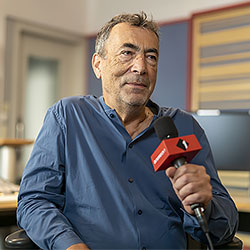 Hubert Achleitner aka Hubert von Goisern has been performing on international stages for more than 30 years - as a musical ambassador for Austria, as an innovator of folk music and individualist. On the third Advent Sunday Hubert von Goisern is undertaking on a completely new task and competing as a quiz candidate in the Christmas edition of gehört.gewusst. Joining him in the celebrity league are Birgit Minichmayr, who returned to the Burgtheater in Vienna this season, her colleague from the Josefstadt district, Johannes Silberschneider, who performed as popstar Johnny Silver in his youth, and the classical musician Maddalena del Gobbo. This excellent gambist has rediscovered an old and highly curious instrument in the baryton, for which Joseph Haydn once composed numerous works.

At the traditional celebrity quiz, every correctly-answered question is rewarded with a financial donation for this year's Ö1 Licht ins Dunkel project: the "CONTRAST" society, which provides early education for blind and visually impaired children, as well as those with multiple handicaps. The celebrity quartet can also score with live musical performances. So Maddalena del Gobbo will be performing tasters from from her current album Maddalena and the Prince and perhaps inspire Hubert von Goisern to a song too.

Birgit Minichmayr, Johannes Silberschneider, Maddalena Del Gobbo
and Hubert von Goisern put their minds to work for a good cause. 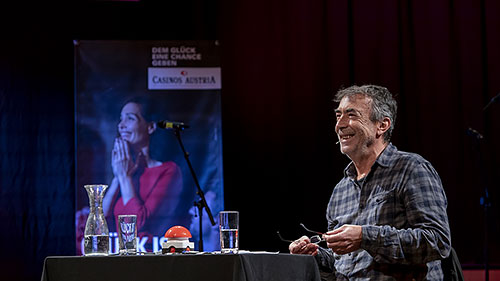 "Who is behind the pseudonym Johnny Silver?" This quiz question was relatively easy for Birgit Minichmayr to answer, as her actor colleague Johannes Silberschneider had performed as rock 'n' roll singer Johnny Silver in the 1970s.

On the third Sunday of Advent the two audience favourites from the world of theatre, film and television were able to capture a new listenership when they took part as candidates in the traditional Ö1 Christmas quiz at the RadioKulturhaus in Vienna.

In this edition of gehört.gewusst with a live audience, each correctly answered questions was rewarded with a donation for this year's Ö1 Licht ins Dunkel project: the Contrast society, which supports blind and multiply handicapped children.

How it feels to go through life without sight is something that Birgit Minichmayr can relate to at least a little, having played a blind woman in the film comedy Die Goldfische. "Of course I asked myself whether, as a someone who is not blind, I could play a woman with a handicap. My colleague Philipp Hochmair asked recently: But who should play Mary, Queen of Scots?"

Minichmayr, who from as of this season is once more a permanent member of the ensemble at the Vienna Burgtheater, has long fostered a burning passion for the Ö1 quiz and does her best not to miss an episode.

Johannes Silberschneider had no quiz experience of his own until now, but has often been the joker on the Millionenshow due to his great general knowledge. Joining the quiz candidates this time was also classical musician Maddalena Del Gobbo. The excellent gambist has rediscovered an old instrument in the baryton, for which Joseph Haydn once composed numerous works.
 
Hubert von Goisern completed the quiz quartet. The founder of alpine rock has been largely out of the public eye in the last three years, writing songs for a new album, and his first novel, which will be published in the spring. The title Flüchtig alludes to the fact that it's about an adventurous journey, but it's also about longing, fate and the fleeting nature of fortune. Asked whether he still gets nervous before a show, he answered frankly: "Yes, quite terribly! But I've made peace with my nervousness. It would make me more nervous if I wasn't nervous."

In order to fill the donation pot for Licht ins Dunkel right to the brim with support from Casinos Austria, the celebrity nutcrackers were able to score more points with live musical interludes. Maddalena Del Gobbo played some pieces from her current album Maddalena and the Prince in a trio, and together with his companions Hubert von Goisern performed his favourite Christmas song. 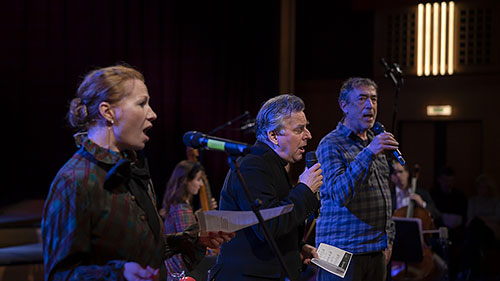