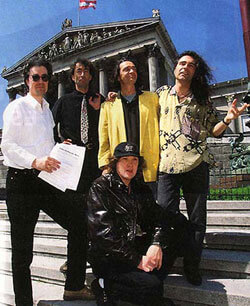 At first glance, one could assume that as a consequence of the rage of the national broadcasting corporation the artists were dependent on singing on the street. But it's not like that: the elite of native pop artists and musicians, all equipped with instruments, moved on a demonstration through the city.

In other places there are marches against abortion and for jobs, here it is the pop broadcaster Ö3, which has shifted sensitive artistic souls into a rhythmic surge.

Demo in Vienna. In the middle of June thousands of musical creators from all across Austria are brought to Vienna on special trains. They deploy on Europaplatz in front of the Westbahnhof and then move on a course of demonstration down Mariahilfer Straße to the Innenstadt. There they will protest in a certainly melodious demonstration against being methodically boycotted by the pop broadcaster. Peter Paul Skrepek, chairman of the Musician, Composer, Author Guild, on the unique Europe-wide action: "It's about the existence of native musicians. From Ambros, Danzer, Arik Brauer and Kolonovits to Hubert von Goisern, all are supporting our protest action."

Skrepek further, putting the gravity of the situation in numbers: The musical percentage of native artists on Ö3 is on average 7.5%. That is deadly!" Hubert von Goisern, who has sold more than one million records: "Ö3 treats Austrian music badly. It's time to become active." Legends like Georg Danzer and Wolfgang Ambros speak of "politico-cultural dishonour", song contest participant George Nußbaumer demands to "finally be treated as equal partners by the and not as court jesters".

"No copies of foreign music!" And Boris Bukowski: "Playing as good as no German-language rock and pop music any more, that can't be the official opinion of the most important music broadcaster in Austria. It's idiotic that native musicians are stopped from copying abroad."

The demonstration, including a press conference, in which literates, film producers and representatives of the arts are to participate (Skrepek: "I would like to win over everybody from Christian Ludwig Attersee to Niki List"), will be the conclusion of a large-scale offensive by the culturally-creative against Ö3, which began last week in parliament. A delegation of artists with Goisern, Andy Baum and Christian Kolonovits presented a petition to national council president Fischer. The catalogue of demands:

The end of the Ö3 boycott: 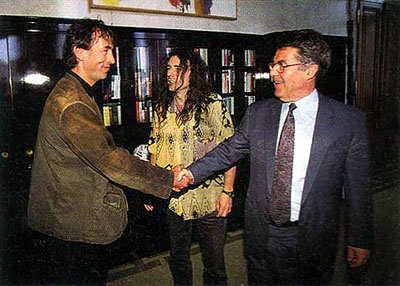 Now the parliamentary committee on petitions must first be concerned with the demand, and consequently constitution committee too. Musicians' representative Skrepek: "We will get on their nerves until the Federal Chancellor says: "Now do something finally!"

Rear light in Europe. Elsewhere between 25% (Sweden) and 90% (Great Britain) of what is played is from their own country, here in this country one hears only 7.5% - nowhere else plays a little (source: MusikerGilde). The consequence: ever fewer native record companies bet on newcomers. An Artist & Repertoire manager: "Ö3 doesn't play it - so you can't sell any CDs."

ORF Radio spokesman Wolfgang Fischer (he strongly denies ever having called Austrian pop music "crap", as Hubert von Goisern alleged in last week's NEWS): "ORF Radio consists of 13 broadcasters and in the nine regional stations, the Austrian quota lies between 30-40%. There can be no human right to airplay! And we can't practise a terror of taste - we therefore reject any quota rules."

Ö3 boss Bogdan Roscic refers to music title research ("All songs are tested, the only deciding factor is what the audience wants"), but considers himself otherwise sympathetic: "The goal they have in mind is right and important, but the path is wrong. Ö3 can't become an Austropop Indian reservation. The problem soon corrects itself anyway if a dozen private radio stations come onto the market."

Music companies leave Austria. It could already be too late, the artists fear. The native record companies are visibly dependant for distribution on American and German companies. The renowned music publishing house Warner/Chappell closes its Austrian enterprise country in September. The country will be cared for in the future care from Hamburg. Others will follow. Musician chairman Skrepek: "A billion Schillings are escaping from the country billion."

According to a study by the economic university in Vienna, in 1989 the music industry was twice as productive for the domestic economy as the steel industry and equivalent to the food industry.

On Thursday, rock star Hubert von Goisern, whose CDs have passed one million sales, together with other native pop musicians handed over a protest against the Ö3 boycott of native music to the National Council President Heinz Fischer. Thus began a grand offensive of Austrian artists against the ORF's pop broadcaster.

Why are you engaging yourself against Ö3?

Ö3 is treating Austrian music badly. When an ORF spokesman called Fischer then says: "If they manage it, then we'll have to play all the Austrian rubbish!", it's time to get active. Of course there's a heap of rubbish in Austrian music - but we're not fighting for that. There are also good Ambros, Heller or Falco numbers. What Ö3 plays for foreign rubbish, where the most translated lyrics are on the Hansi Hinterseer level. That's why I don't turn on Ö3 any more.

Is what Ö3 is doing a cultural-political disgrace, as stars like Ambros or Danzer say?

You could say that. An industry which brings in millions is being destroyed by this course. According to documents from the Musikgilde, in 1989 alone the music industry in Austria was twice as productive as the steel industry - today its being killed. I see what a hard time many musicians are having, just to make a living. You can at best make advertising singles here - that's degrading.

How will you protest?

A number of actions are planned, politicians are also becoming increasingly interested in us. Ö3 will soon no longer be able to make excuses on some rotation computer.

"Ö3 is dull and faint-hearted!"

Since Hubert von Goisern withdrew from the native music scene barely three years ago, things have been relatively quiet around him. Now he comments on the discussion about Ö3. "To give me as an example of someone who was played by Ö3, is strange. What did they play: Hiatamadl only after massive pressure from the listeners, who wanted it and then Heast as net. Nothing else. But I have brought out four CDs, that would mean that the rest was just rubbish."

Today Goisern, who wants to record new songs again and is currently working on a project with Tibetan musicians, can't really get on with Ö3: "Ö3 is dull. The station has no identity. I would call the programming faint-hearted, uncreative and not innovative. Private radio stations can only revive the native music scene, because it can't get any worse for us than it is now."