In 1997 the Julbach artistic couple of Prof. Erwin Reiter and Mag. Edda Seidl-Reiter founded the St. Anna Award for people who have earned great merit in art and culture. This year the award went to Hubert von Goisern. The musician was recognised by the award's board of trustees "both for his concert ship campaign, as recognition and solidarity for this project designed to bring people together, and for the fact that through his use and development of Upper Austrian folk music, he has fundamentally shaped the musical landscape."

The award ceremony took place in Julbach, in the sunny Mühlviertel on Saturday 30th July and was flavoured with music from the town band. The bronze sculpture award was presented to Hubert von Goisern by Mayor Johannes Plattner and Mrs. Edda Seidl-Reiter. During his laudation Salzburg cultural figure and former ORF regional manager Friedrich Urban spoke of Hubert's ability to create "the unusual from the usual" and how he had freed the meaningful word "homeland" from its fug.

Hubert von Goisern and his collaborative works are rewarded in Julbach 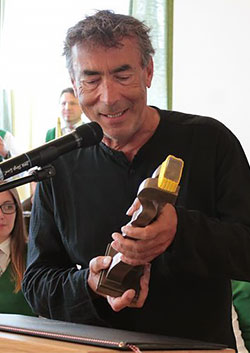 JULBACH. For the awarding of the 20th St. Anna Award, the jury looked as far as the Salzkammergut and there they struck gold with Hubert von Goisern. The singer-songwriter sets unifying priorities with his music and his projects and thus lines up perfectly among previous award winners.

The artist family Reiter and Julbach want to bestow this award 100 times on people who have earned merit in art and culture in the border region. "Music and art cross boundaries, build bridges, enables friendships to be made and unites cultures - Hubert von Goisern continually lives this with his tours," praised presenter Ludwig Gabriel, who outed himself as a fan. A particular decisive factor was the unifying campaign with the concert ship on the Danube; and "Hubert von Goisern has shaped the musical landscape with his use and development of folk music" continued the jury's statement.

Laudator Friedrich Urban, former manager of the ORF's Salzburg regional studio said: "It's possible to put any idea into action, even a crazy on. Hubert has gone his own creative way in spite of every human, bureaucratic or financial hindrance. He has created the unusual from the usual and freed the word "homeland" from its fug.

The freshly-minted St. Anna award winner doesn't like being in the limelight, as he said himself: at the beginning of his career he was ill before every show, because he's from the Salzkammergut and likes his peace. The element of his creativity and life that has dealt with bringing people together was actually always difficult for him, "it was met with a lot of scepticism and I failed with many ideas", explained Hubert von Goisern, who despite all the hurdles has lived his need to push boundaries. He was of course delighted with the bronze sculpture award. "It's a beautiful award too", said the musician, who spent time in the Mühlviertel with the Alpinkatzen in 1991 for their first rehearsals. What he really doesn't like though, is when politics gets into art, "that hurts music", he said, because "music and art are much greater than politics can be."

Spurred on by his words, Mayor Johannes Plattner added that the political element should be done without. He will exemplify this and work towards the whole community pulling together.

Hubert von Goisern recognised for his cultural engagement with the St. Anna Award

Hubert von Goisern was chosen for the 20th St. Anna award. Back in April, the 63-year-old musician was celebrated in Vienna as the Artist of the Year. The St. Anna Award was founded in 1997 by the artist couple Erwin Reiter (who died in December 2015) and Edda Seidl-Reiter for people who have made a great contribution to culture and art. [...]

From Mühlviertel out into the wide world

In his acceptance speech Hubert von Goisern revealed: "I had my first rehearsals in 1991 - in the Mühlviertel. And it's from here that I set off to conquer the world. I'll be coming back to the Mühlviertel more often now, because my son has found a job and will be moving to the Mühlviertel". On the subject of other cultures, the musician continued: "To make contact with other cultures, you have to hold yourself back a great deal. The interesting people, at least those I want to get to know, are the quiet people, the shy people."

Hubert von Goisern describes the Mühlviertel with the feeling of having a piece of an ideal world around you, "while bombs are exploding left and right" and with regard to music said: "Music can express something for which there are no words - a feeling of being alive. I don't like political singer-songwriters. Music isn't left or right." In closing he appealed to everybody: "We mustn't lose courage. Nobody knows where things are leading, because there are too many people who have a plan." 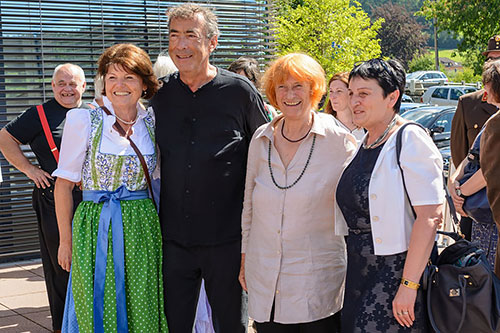