Austrian singer-songwriter and world musician Hubert von Goisern
talks about how he looks for breadth and what he thinks of tradition. 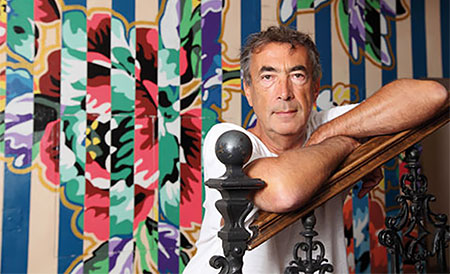 You come from the Salzkammergut and from there have travelled the world, lived in Canada and the Philippines and played music in many places. What was the motivation to look for breadth?

Curiosity: At first it was about getting out - going wherever - from the, for me musty, Salzkammergut. I grew up there in a defined, closed-off society. People from Vienna were seen as the enemy by many people. I can remember an American boy who was at our school when we were about 12 years old. He had no time for the church. And I was worried that he wouldn't get into Heaven when he died. As I was thinking about it, it dawned on me how absurd that was. That's when the feeling of needing to get out started. Fantasy drove me too: I was looking for a different kind of approach to life, a hotter one perhaps. I had the desire to go to Africa, to experience a different kind of luxury and to get a different view of life as a whole.

What did you find on your travels?

Myself; in much greater measure than I would have been able to at home. I found and defeated my fears of what was different. It's like climbing. Of course you're afraid of falling. But you do it, because you want to overcome gravity as well as this fear. It's the same with travelling. It challenges you, it challenges your senses, you can't make assumptions any more, because everything is different. Sometimes it's not just that people are driving on the other side of the road, they might shake their head and mean "yes". Just the questioning of body language alone makes you richer and greater. I discovered myself and I don't think that this discovery is over, because it will probably continue to my last breath.

You also looked for and busied yourself with the music of the regions you were in. What was your approach to traditional folk music in these places?

In the Salzkammergut, where I grew up, folk music is still - and back then even more than now - a very specific melody, embedded in a very specific milieu. I started to question it during puberty and offended people with my way of looking at things. Consequently I turned my back on everything to do with traditions. The tourists at the summer resorts liked the dirndl and lederhosen fuss and the music that was played there, but I learned the hard way that isolating that was. I realised through my travels that - more than anything else - I looked for the roots. In the Philippines, noseflute playing interested me far more than the many pop bands that were there. I took myself by the nose, so to speak, and asked myself why roots interested me there, but I rejected them at home. I undertook to deal with them. But it was only possible by deconstructing them. One on one I could never have accepted them. I was able to separate the works, the tradition, from the people passing them on. You should never unpack romanticism and complain that so many traditional things are dying out. If we don't move with the times, are not prepared to open up, to develop, we'll die out. We should allow our development to fall victim to traditions. Just because something has become traditional, doesn't mean it's good. Being conservative imparts a certain, if specious, security. You get the feeling that you can hold onto something even if it's a dead branch that will break under the weight.

You give concert in parts of the world in which people don't understand your lyrics. How do they react to your music?

There is non-verbal communication via music. It is a comprehensive language, because it pushes forward without words in areas of communication that you can't even put into words. It works whether I'm playing with African or Tibetan artists. Art should first and foremost free fantasy, you can't set the way it should be understood. It shouldn't be politically correct either. It can be that it is for one thing or another, but it shouldn't be a must. That's why it's art and not real life. Art has a much higher standard than one thinks. When someone does something artistic, an unbelievable amount of thought goes into it. There is a lot of lifeblood and concentration in art - always and everywhere.

And how do you locate the regional in a globalised world?

The countermovement to globalisation is regionalisation and that's not just upside down. Why should you take less care of what is there than of what is far away? But there are the global players too. When they campaign for regionality, sometimes that's fraud. Transport is too strongly supported. It can't be that a beer from Vorarlberg costs the same in Vienna as it does in that province. We ship unnecessary things around the area. Now and again it's good to try something exotic. Then you should pay double or triple for it. If profit is only made on the trade, it needs to be clear that someone is bearing the costs and losing out. It doesn't work otherwise. There are too many people who only trade and too many who produce. And aside from financial profit, it's more satisfying to produce something than to transport it and just trade it.

Why is it difficult for us to think in terms of larger contexts, to develop something akin to a world consciousness?

It's a privilege that not many people can afford. You can't reproach people, for example in Africa, who fight to survive each day, for not thinking in the global dimension. But us, you can. Faced with migration, people seeking protection, economic and disaster refugees, we must deal with the global dimension, whether we want to or not. The problems have come to us, because we weren't able to think ahead.

Where do you see a need for action?

I'm against developmental aid. It's like giving alms. You should pay a fair price to those producing raw materials and ridiculously low prices as is usual at the moment. Instead of this, people are given developmental aid money and kept small and dependent. They have no feeling of self worth. It would be great if this irregularity could be recognised and changed. But people live by the motto "if it doesn't hurt us, we won't do anything". We could change something by placing greater value on education and information. By presenting the relationship between things and not lying to ourselves. Including with well-meaning concepts that ignore reality.

What is your view of the current social and political developments in Austria?

I find it painful that life has become so polarised. Yes, it is necessary to get involved. But it would be wonderful if we could get back to the order of the day. Many taboos have been broken. There has been a radicalisation of thought, language and action. I hold the politicians responsible for that most of all. We have been ripped from our feel-good world. Not just in Austria. There is a very underexposed sense of solidarity. And it's more than regrettable that such a great chasm has opened up between town and country. Voting here at home has revealed - as in Russia, Turkey and England too - the majority of the population thinks they've been left by the wayside. But it doesn't mean that people have it bad. In reality there's much more poverty in the cities than in the country. But in the country they think that everything's gone downhill and they need to turn back time.

What can an individual do to improve the world?

First of all to be a figure of cheerful courage. Those are two important words ... cheerful and courage. And you should always question things. A great deal has become tradition and we're doing it just because it was always that way, even though it has no meaning today and perhaps is even counterproductive. You must face change. It happens - it always has! If you can accept the current state, you can change something too. And you should be cheered by positive things.