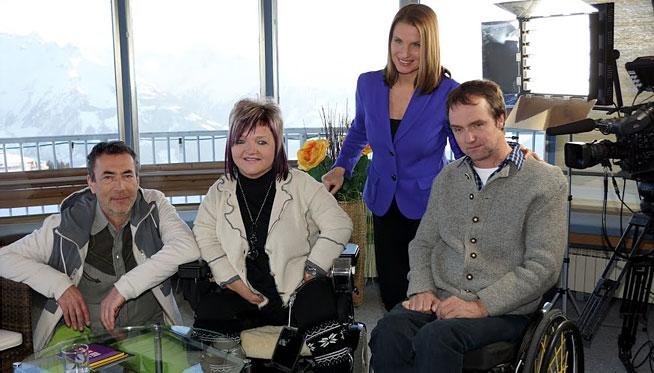 Last Friday on the Schmittenhöhe in Zell am See, two remarkable men met "at eye level", who in very different ways have made difficult and ambitious times in their lives into their own personal "summit victories".

Initiator Marianne Hengl, Chairlady of the organisation RollOn Austria – "We're handicapped" was able to get the world musician Hubert von Goisern and Bruno Lemberger, a farmer confined to his wheelchair, for a touching and deep dialogue.

After an accident at work, the world looked very different from one moment to the next for Bruno Lemberger: "I had an accident while doing woodwork! After the accident I couldn't speak, I couldn't move. At the age of 29 I was having nightmare thoughts of having to live in an old people's home. The love and strength of my family carried me through these desperate hours and so I learned to fight, my will to take part in life was unbridled.
Our farm was completely renovated and so now with the help of my family I can manage our farming. At home - that's exactly where I belong, I don't need a holiday to be happy.
However, it really fascinates me that Hubert von Goisern has been to so many places in the world. Everyone takes strength from different places. What gives me great support in life is my faith. My accident showed me a new journey through life that I perhaps would not have otherwise pursued. I trained as an end-of-life carer, because - I think - I can give dying people a lot of strength thanks to my very formative personal history."

Note from RollOn: Bruno Lemberger is now happily married and father to a 4 year old son.

Hubert von Goisern, who has scaled many summits worldwide, talks of his own summit victories in life: his desire to travel started in his younger years and remains unbroken today: He spent years in South Africa and Canada. He learned to play the noseflute from headhunters in the Philippines. As a successful musician he visited Tibet and also met his role model, the Dalai Lama. He also spent time in East Africa with the primatologist Jane Goodall.

"I feel no reservation in dealings with people who are handicapped. My mother was paraplegic after an accident and was devotedly cared for by my father and by us children when we were at home.
I find it fascinating how Bruno has a handle on his life and I'm certainly going to take the chance to visit him sometime on his farm."

"These programmes should bring to the fore even more such "summit victories", most of which were committed in silence and don't come across as great publicity," said the delighted organiser Marianne Hengl .