Death of knowledge: The loss of local wisdom

The loss of local wisdom is the subject of the "Wissenssterben" - death of knowledge - discussion evening on 20th November 2013, 19:00, in St. Virgil. Musician Hubert von Goisern, Franz Karl Prüller from the Erste Foundation and the regional developer Anita Moser will be in discussion with the social philosopher Clemens Sedmak.

Knowledge is power and power defines knowledge. This power is to be found in urban centres with its elites, corporations and universities. New technologies flood the villages and devalue nonindustrial, health and traditional knowledge. Sometimes that can be good and important, but throws up many questions. Local knowledge in the villages is replaced with elite urban knowledge. Thus local knowledge dies and similarly languages, or plant species die out. Knowledge of handwork, construction, cooking and healing are lost, or are considered outdated. What will happen when this wisdom dies out? Do we really know what we have in our local knowledge? This question of the value and limits of local wisdom is the topic of the evening.

"With their backs to the wall"

Is old, locally-anchored knowledge threatened with extinction? Musician Hubert von Goisern on the fruitful tension between regional bonds and cosmopolitanism, as well as the political dimension of tradition.

The engagement with regional identity and local music traditions plays a prominent role in Hubert von Goisern's work. At the end of November the musician took part in a discussion in St. Virgil Salzburg on the subject of "the death of knowledge". Subsequently FURCHE met him to talk.

What value does old, local knowledge have in our technological world?

When you lose local knowledge, in the worst case you are completely dependent on the outside world. And regional influences of climate, landscape or natural resources cannot be simply brushed aside with technology. But I don't necessarily uphold tradition. The concept of old traditional knowledge is always so stylised. Something is not good because it's old, rather it's old because it's good.

Good old traditions - what examples come to mind for you?

Mowing with a scythe for example continues where it's practical. I have a little lawn I cut that way. It didn't make sense to me buy a lawnmower that uses petrol, smells and makes noise. You're not dependent on oil prices, and there's nothing to dispose of. This independence from the supply depot is worth the effort as far as I'm concerned. In music it's the acoustic instruments, where you don't need any electrical sockets, or the singing technique of yodelling ...

Why are folk music elements so important for your work?

Time and again I play on continents where they have little or no idea about Austria. When I'm standing there in Africa, or Nashville, or Louisiana playing a country dance with the accordion, I don't feel alone or vulnerable any more. At that point generations of musicians are standing behind me and holding me.

How did you discover the Austrian tradition of yodelling?

I lived in the Philippines for six months in 1982 and found a very archaic style of music-playing there. There was no radio, no TV, no record player - and people were completely thrown back on themselves when they wanted to play music. It really touched me and I remembered that the musical traditions in my homeland hadn't affected me so much. I always felt such a strictness with folk musicians, which I found unpleasant: when the Goiserer Viergesang performed, nobody on stage or in the audience smiled. It would have been like disturbing a mass. I grew up with the Beatles, and jazz artists like Louis Armstrong and Miles Davis were great heros for me. But the traditionalists complained about this music. I thought to myself: if I take up with these people, I'll become just as stubborn. It wasn't until I came back to Austria after seven years abroad that I began to look at my own roots, which I had rejected as a young man, as the scene was too exclusive.

Is the excluding moment a prerequisite for culture to be preserved in its purity and nativeness, or does that not necessarily have to be that way?

No. Because eternal nativeness can't be the aim. My origin is different from my father's, although we grew up in the same valley. But if there is a strong regional identity, then it's the cultures that have something exclusionary about them. I find it horrible. On the other hand I'm drawn to them and fascinated, exposing myself again and again to situations in which I'm shut out. I've spent weeks with Samis, Senegalese drummers and Tuaregs and have always been cut out by them. I haven't made friends with any of these people, although I've taken great trouble to do so.

What is the reason for this rejection?

All these traditional cultures, including our folk music, see themselves as the last burning embers. They stand with their backs to the wall and fear change. But each culture that rigorously isolates itself is ultimately doomed to fail. Passing on cultural knowledge and at the same time allowing a fertilisation, a metamorphosis, is the great field of tension that has shaped my work for nearly three decades now.

Traditional cultures are threatened with extinction, but nowadays have the chance of surviving in the electronic archive of the internet ...

It's not about preserving cultural good by all means, rather the constant adaptation and improvement of our culture. The familiar doesn't just give us security. Traditions are our connection with the past - and there's some in that I'd like to relinquish.

Does globalisation lead to the watering down of local music traditions

There is the danger that "world music" will become "nondescript music". But creativity doesn't take place in a spiritual vacuum. It is supplied by many sources, never from just one. And cross-fertilisation has existed since the beginning of time.

What do the numerous archives on the internet mean to you?

I think it's great, but it also clobbers me somewhat. The fount of music on Youtube alone is amazing. I can find anything there, even the most exotic things. At the same time it handicaps and frustrates the fantasy that used to be connected with the search, because you immediately get apparently concrete information.

What do you say to the new government and the dissolution of the country's Ministry of Science?

I'm stunned that Karlheinz Töchterle, who did really good work, has no place in the new government. Aside from that the abolition of the Ministry of Science is cultural-political defeat. And making Sebastian Kurz Foreign Minister makes a mockery of this office. With due respect to the new minister, he lacks life experience. I would have found it more exciting to make him Minister of Education. I also don't understand why the SPÖ has left such important posts as Home Office, Foreign Office, Treasury and Ministry of Justice to the junior partner in the coalition for the second time. It can't be as bad as one imagines. But half is enough. 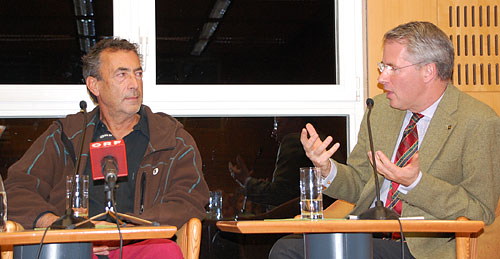 Listen to the Wissenssterben discussion

Yesterday evening Hubert von Goisern, Anita Moser and Franz Karl Prüller discussed the subject of the "death of knowledge" with Clemens Sedmak. Is local knowledge dying the same way that languages or plant species die out? What will happen when local knowledge disappears? What is local knowledge worth? Don't we always long for what we no longer have? Do we glorify old knowledge?

When a good idea is begotten, does it then remain? Hubert von Goisern spoke of the Inuits in Greenland, who invented the construction of kayaks twice. Franz Karl Prüller came to the conclusion that knowledge need not die out nowadays. We can all record, the question is, what do we do with it? With many examples from her experience in community development work, Anita Moser emphasised that local knowledge is a communicative, living knowledge and a great treasure trove for us all.

What dies when knowledge dies? Franz Karl Prüller told of his experiences with storytellers in Somalia. In refugee camps especially, it is of immense significance when there is someone to tell stories from the homeland, as a sign of strength, support, keeping a piece of home and for identity formation. "Why is knowledge needed? For survival. When technology changes for example, old knowledge is replaced. It's no longer necessary to be able to build hay wagons yourself," says Prüller. The loss of knowledge can also be an advantage.

"Old knowledge is not synonymous with very valuable, just because it is very old. For me, it is necessary to keep checking old knowledge ... seeing whether or not it has a value beyond the museum", says Hubert von Goisern. It isn't necessary to conserve and archive everything. Finding the balance between old and new is important. He himself went on a search for the origins of music, for the first melodies. Where do the old yodels come form? Folk music in "a self-contained cosmos" was not very helpful, the sound documents from the Goiserer Viergesang even less so and his curiosity led him out into the world.

Fascinating high-profile discussants with sometimes very personal approaches to the subject on the panel, a full auditorium at St. Virgil and many contributions from a very interested and attentive audience: in short, a successful start for the scientific conference "Local Knowledge".