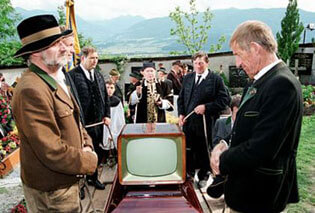 Ever more television shaped the lives of the inhabitants of a Styrian village, providing not just food for conversation, but also a reason for fights and political controversies.

Television exerted a magical attraction over everyone in the village and almost nobody was missing at the beginning of a programme in the special room at the Kirchenwirt, where one of the first televisions in the village stood. Roman's grandmother temporarily worked there in the kitchen and her cooking suffered under her passion for the television.

A television report about the concentration camps at Auschwitz and Birkenau made invisible graves in the village visible. The social society had relocated its meeting to the room at the Kirchenwirt. The television reports opened old wounds and made new ones. The atmosphere at the Kirchenwirt turned against old Adler, the former shop owner, whose sons were murdered at Auschwitz. He was the next in the village to buy his own television, in front of which the children sat on Wednesdays to watch children's programmes, while the social society met in the room at the Kirchenwirt.

This production was directed and written for TV in 1995 by Julian Pölsler. Hubert von Goisern was responsible for the music and Heast as nit plays at either end of the film.

What would a man from Goisern and a man from Styria do without the Kärntner Straße? Hubert von Goisern and Julian Pölsler in any case would not have become acquainted in 1987, had the folk music innovator not shouldered his accordion on the magnificent Viennese avenue at that time. Because: stop, the film maker strolling past thought to himself. And he stopped abruptly. Naturally that was long before Hiatamadl climbed to the top of the charts. Also a long time before Pölsler filmed the registrar series Auf immer und ewig.

But nature boys have an awareness for one another. Another year passed until Hubert von Goisern, who has already delivered as a reasonable actor in Hölleisengretl, also heeded Julian Pölsler's stage directions. But in the meantime he has composed music for the friend: for Die Fernsehsaga - eine steirische Fernsehgeschichte. The ambitious two-parter will be broadcast on ORF2 on 30th October and 2nd November. And the pre-premiere in the Styrian Trautenfels, one of the filming locations, made certain:this amusing melancholy reminder of the early days of the TV era will find its audience far beyond the borders of the country.

1st August 1955, 17.00 on the dot. The Austrian broadcasting company started their TV trial programme, at first limited to a few hours a day. But it is enough to turn life completely upside down in a remote Styrian village. Soon the Kinski look from the Edgar Wallace films becomes the village ghost, the children want black hair like Winnetou, and Der Abschied von Lassie moved everyone to tears. "Woody Allen's Radio Days inspired me to it," said Pölsler, born in 1954. And ORF director Gerhard Zeiler, likewise present at the premiere, knows why he feels a special love for the Fernsehsaga: "After the Alpensaga, it is once again a huge TV project." Apart from that, "the little Gerhard Zeiler was born 12 days and 7 hours before the 1st August 1955." If the Fernsehsaga ratings please Zeiler in the autumn, there are further instalments. Hopefully.

Also a style of Alpine saga

A provincial governor, the director and Hubert von Goisern's dog celebrate the premiere of a remarkable TV film.

Castle Trautenfels at the tip of the toe of the Styrian Grimmings. Hundreds of natives on the steps. In the hall, Governor Waltrand Klasnic talks to her citizens. Hubert von Goisern's affable labrador huskie half breed gets tender loving care in turn. The head of ORF Gerhard Zeiler is still struggling in the traffic jam around Liezen. Film producer Dieter Pochlatko drags armchairs into piles of four in order to channel the crowd. And the mayor Kurt Tasch gives help with orientation by way of introduction: Pürgg-Trautenfels is one of the biggest municipalities in the country and the most beautiful in the world.

1st August 1955 - The director Julian Pölsler and his team had filmed for six months in the area; now they came back in order to present the result: Die Fernsehsaga - Eine steirische Fernsehgeschichte describes in two parts and a total of three hours the story of a small village in the 50s. The dominant background forms the story of the Austrian television that took up its broadcast on 1st August 1955 (Zeiler: "12 days and 7 hours after I was born") Pölsler, born in the area in 1954, colours the whole very autobiographically and with lots of humour. Hubert von Goisern - just back from a Tibet tour - wrote the music.

What ORF customers will probably see on the 30th October and 2nd November fills with enthusiasm in Trautenfels: "For me, the film was tremendously moving," for instance, the governor thinks, "everyone has seen a part of their own history in there."