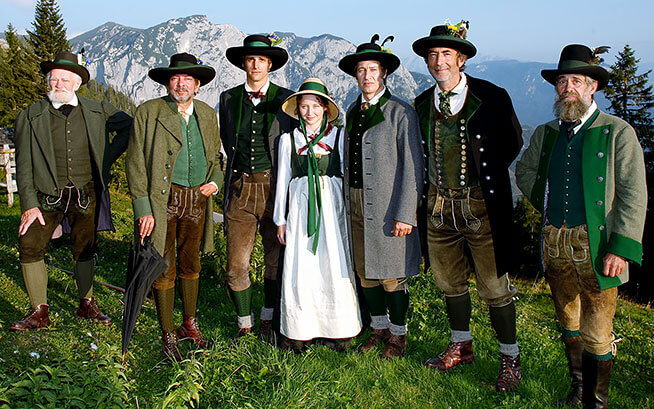 To mark the 150th anniversary of the death of Archduke Johann, director Julian Pölsler is telling the love story that took place between the Habsburg and Anna Plochl, the daughter of the postmaster, in the form of a period film. Aside from Tobias Moretti and Anna Maria Mühe in the leading roles, there will be another familiar face on screen as Hubert von Goisern once more stands before the camera as an actor. He will be taking on the role of Paul Adler, a farmer, who not only revolutionised farming in Styria, but also noted down the traditional songs and stories of the Ausseerland for posterity.

Love that defies all resistance, bitter power struggles, disfavour and intrigue, the unique love story of the Archduke Johann and the woman of his life, Anna Plochl, has been made into a film by Julian Pölsler on the 150th anniversary of Archduke Johann's death.

They come from two different worlds: he, the brother of the Emperor, she the daughter of a postmaster. Many want to put an end this liaison, not least the Emperor himself, but their love for one another is stronger. One of the greatest love stories of the 19th century!

A feeling that one as TV columnist has nearly forgotten: being able to find something unreservedly good. Ah, that feels wonderful!

The film of the story of Archduke Johann was, a day before New Year's Eve, nothing less than the TV event of the year. Anyone who thinks that a period drama has to be made of kitsch and stupidity in order to be a success - that is, like the incredible cheese that was Sisi - should watch Geliebter Johann, geliebte Anna long and hard and be soundly embarrassed.

The film had style, swing, wit, it had the courage to show beautiful images - and above all it had great actors: Tobias Moretti, Peter Simonischek, Gerti Drassl, Anna Maria Mühe, Gertraud Jesserer, Hubert von Goisern - they were all able to pursue their craft with great dignity. (In contrast to the Sisi stars: who just stood around embarrassed, pale with shame at the impositions of the direction and script.) At this point we welcome most warmly the former politician Franz Morak, back in the profession he masters. Keep it up!

And the best news: the film was also a ratings hit, unlike Sisi.

A love story that became a legend: Archduke Johann, the brother of the reigning Habsburg monarch, and Anna Plochl, the fun-loving girl of the people. When the Kaiser declares the previously granted marriage licence to be invalid, Johann takes his "house wife" to his estates and businesses to show the whole world how unjust and unmerciful the Kaiser is being. At the same time he takes on a political role for his province of Styria. Long separations nearly spell doom for the couple's relationship. Only when Johann gives his brother an ultimatum and Chancellor Metternich deems it a good time for him to marry a commoner are Anna and Johann permitted to secretly say "I do" in a night-time ceremony. 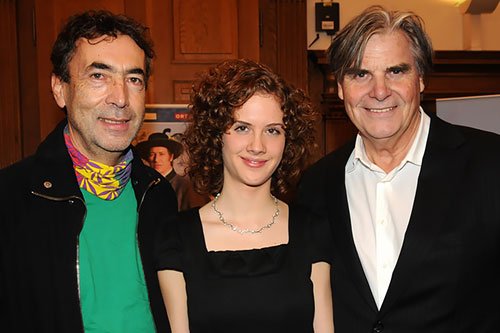 The "who's who" of Austrian acting will be seen in the romantic drama Geliebter Johann, Geliebte Anna on 30th December (ORF 2, 20.15) - but the premiere of the 2.7 million Euro, 95 minute long TV film in the auditorium at Graz university had a first class lineup too.

"Contrary to the cliché the Archduke is here an introverted ascetic", revealed Moretti. And guests like Rector Alfred Gutschelhofer and Franz Harnoncourt-Unverzagt were amazed at stories around the production - a car of props was burned. And while editing in Vienna Pölsler faced a knife attacker.

When the Archduke must fight with aeroplanes

Tobias Moretti & Co. are shooting the ORF period film "Erzherzog Johann und Anna Plochl" in the Ausseerland until the beginning of October. Julian Pölsler is making the film of the love story between Johann and Anna. 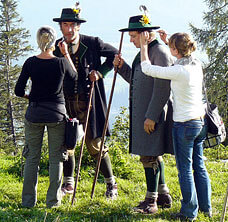 1800 metres above sea level, untouched nature, beautiful silence. Or so you might think, because on the Loser mountain, where the Archduke Johann production is currently being filmed, there is more background noise than director Julian Pölsler would like. The scene is rehearsed three times, then the cameras are running. "Stop, where's the anti-aircraft gun?", fumes Pölsler. About a hundred metres about the heads of Tobias Moretti and Hubert von Goisern a propeller plane has noticed the goings-on and keeps flying unhurriedly over the set. As long as the noise of the propeller can be heard, there's a break in filming. In Archduke Johann's time there were no such noises in the background - and no mobile phone noises or howling motorbikes either. The cameramen even have to pay attention to the surrounding area. The panoramic road on the Loser mountain is wonderful, but the asphalt, cable car supports and other similar infrastructure are simply not for this film.

The beautiful weather of the past few days has saved the epo-film production. "We're filming almost everywhere on location, so the weather has to be right", the team says. The Ausseerland is not the only place prominent in the film, Öblarn, the Strechau fortress and other stops on the Archduke's way, such as the furnace, will be there too. Scenes will also be filmed in Graz, Vienna and Salzburg.

Throw the walkers into the hedge

A couple of men in traditional dress are standing around in an alpine meadow and talking about farming. "Everyone is familiar with the potato, but only as animal feed. That has to change!" A landscape painter paints and an old dairymaid offers buttermilk. Then one of the gentlemen interrupts the conversation. "The young ladies are coming!"

Sunshine, mountain panorama. Postcard idyll. At first glance. If only there were no interruptions ... the road below the pasture is closed at time so that no cars can drive past in the background through the year 1820. It's difficult to ask paragliders and glider pilots to stand still for a few minutes, so they let them pass and then carry on.

As evening approaches "the sun, the pig" (director Julian Pölsler) is causing problems. It is threatening to set before the final scene is in the can, a scene in which the young ladies are to be carried in a horse cart. Pölsler is becoming uncomfortable. Things really have to go fast now. "Attention! We're filming!"

The horses run, the girls shout ... and the star comes through the shot, even though he's not meant to. From the top.

Two oblivious walkers appear on a forest path. "Alert, alert, people are coming. Take them away. Through them into the hedge or something". A member of the team runs off and pulls the walkers into the forest.

The sun shines, the horses run, the girls shout, nobody runs through the frame and Pölsler is immediately in a good mood again. "Very good, thank you, perfect." Kathi, the 79 year old dairymaid has to give another interview for Seitenblicke.

What awaits the audience on 23rd December on the ORF is a lavishly-told love story that does not balk at its proximity to kitsch. With an all-star lineup: Gert Voss, Peter Simonischek, Max von Thun, Hubert von Goisern are among those to be seen in supporting roles. And it's guaranteed that there will be no modern walkers. They're in the hedge.

Miss Mühe has trouble with the language 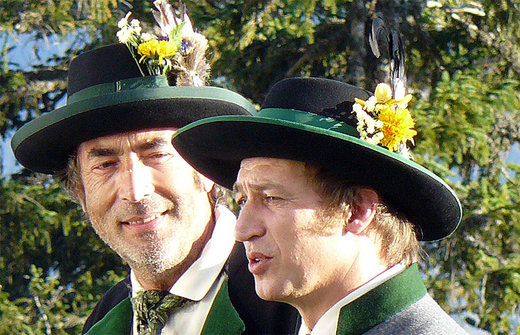 Tobias Moretti is the Archduke, German shooting star Anna Maria Mühe stands before the camera as Anna. A 40-member crew is currently filming in Altaussee. As always, the director, who also wrote the screenplay for the romantic drama, has thought of everything. "Anna has to speak in the Aussee dialect, so we had a CD made with the lines spoken and sent it to her beforehand." Mühe: "I listened to it every day while driving in Berlin - although at the start I need the script to have any idea of what was being said." In the film she speaks a mixture of dialect and high German. "After all, they should be able to understand it in Germany too." Hubert von Goisern, as visionary farmer Paul Adler can remain with his Hiatamadl slang.

Venturous men in their leaking boat 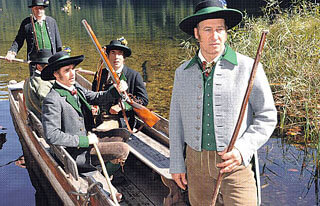 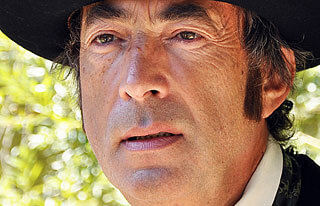 The Kleine Zeitung was at the first day of shooting for a big new ORF production: with Tobias Moretti, Hubert von Goisern, Max von Thun and more in Erzherzog Johann at Toplitzsee in Upper Styria.

"The Archduke is coming, the Archduke is coming!" calls the delicate girl running through the forest dressed in an Ausseer dirndl and straw hat. The many walkers at the Toplitzsee lake pause for only a moment. First of all they don't know who is being announced to the cameras and secondly he's not actually coming.

"Ok, the scene is fine", says director Julian Pölsler with casual authority. The Romy and Bayerischer Film prizewinner isn't put off by the tourists either. And all this on the first day of shooting of a work that is to be a kind of public service major project: the ORF and epo-Film co-production of the story also written by Pölsler of the legendary Habsburg Archduke Johann.

The multitalented Tobias Moretti is playing the Archduke. The team is waiting excitedly for his arrival too. Around midday Moretti comes on set in a Styrian coat and hat and wearing hobnailed boots. He doesn't want to talk about his Johann role yet: "Let me find my feet first, in the character and the surroundings," he requests.

Scenes are to be filmed in which Johann meets the postmaster's daughter and his later wife Anna Plochl, played by Anna Mühe. He is to come across the lake together with his entourage in a flat-bottomed boat.

A halfway antique-looking boat stands ready, Moretti, Hubert von Goisern, Max von Thun and some others climb in. After a few metres water penetrates the vessel. Just once the director briefly loses his cool: "I can't take care of everything!", grumbles Julian Pölsler.

The number of boat occupants is reduced, they sail again. On shore waits Anna. The camera is running and contact is made with the people out on the emerald green lake via radio: "please head straight for the huts", comes the direction. The route is sailed many times and from terra firma we admire the venturous men in their leaking boat.

The beautiful weather makes everything happy and at ease. Even as walkers and film crew threaten to mix with each other everything remains calm. Pölsler works with precision and very quickly for such a big project. A complete professional.

The boat moors, Moretti is standing at the bow and steps on land. Every inch an affable archduke. You could almost think that he's found his feet. In the unfamiliar surroundings and in the new role.