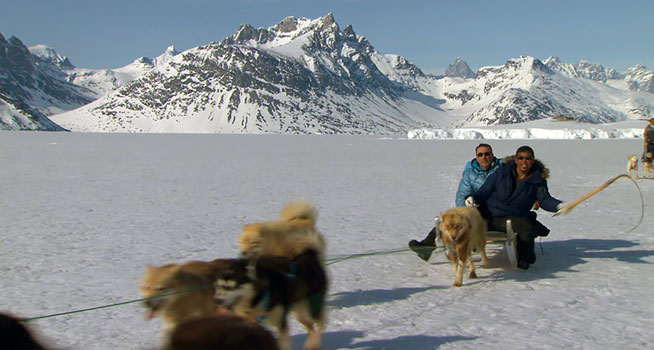 East Greenland is one of the most inhospitable of all inhabited places on earth. Extreme climate conditions, icebergs on the coast, which are difficult for even ice-classed ships to pass, as well as the barely usable infrastructure all add up to a very sparse population.

The problems that arise for the people living there are diverse: aside from the very high unemployment rate, the loss of cultural identity chips away at the self-confidence of the Inuits. Young people deny not just the traditional language, but the traditional musical influences too. Hunting is losing its significance, alcoholism is widespread and the suicide rate, among young people in particular, is alarmingly high.

Hubert von Goisern follows in the footsteps of this folk culture threatened by extinction, in the hope of making a small contribution with his music towards strengthening the East Greenlandic self-confidence and its cultural identity. The original soundtrack to the film was composed by Hubert von Goisern.

Greenland. With Hubert von Goisern as observer, Salzburg director Chris Weisz has filmed a remarkable documentary about the life in East Greenland. 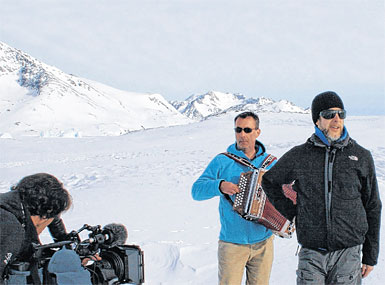 SALZBURG, TASIILAQ (SN). Hubert von Goisern kneads his fingers. Cameraman Hennig Brümmer rubs his hands. Neither accordion nor camera work with cold hands. And it's cold. The sun makes no difference either. The wind is blowing so gently across the frozen ground that it sticks to the skin. Director Chris Weisz has it better. His hands are in gloves and in his jacket pockets. "We'll do that again", he says. The sound of the accordion goes beyond into the solitude of the Greenlandic ice and remains the only human character in the white zone that swallows people. "Hubert is unique, boulder", says Robert Peroni. He is one too. The South Tyrolean has lived in Tasiilaq in East Greenland since 1983. He runs a small hotel in which he employs only locals. He was once the first to cross the island on foot. He stayed because he wanted to do something for the people on the edge of ruin.

And what does people mean? 3500 people live in East Greenland, along 20,000 kilometres of coastline. They have their own language and a centuries old culture of hunting - both - and with them the identity of the people - are threatened with extinction.

Hubert von Goisern came to Tasiilaq at Peroni's invitation. Weisz and his team accompanied him. That was the end of March 2012, exactly a year ago. Now the documentary about the expedition is finished. Gegen die Stille will be shown on Servus TV on Good Friday. "Greenland - in terms of organisation, it's a bit like Africa on ice", says Weisz.

He has already filmed two documentaries about the Goiserer. He was on the "Tavern Tour" in 2011 and he also made a film about the Brenna tuats tour last year. The musician Hubert von Goisern stood at the centre of each. This time - as once with the film Warten auf Timbuktu – the observing, world traveller Goiserer emerges again.

Weisz shows how the Goiserer approaches people who live under extreme conditions, determined on the one hand by nature and on the other hand by a new era influenced by satellite and Danish welfare benefits that is not very compatible with the old traditions.

In East Greenland the old Inuit culture of hunting is dying out. Climate change means that the ice arrives later and melts earlier. It makes it harder to hunt over the fjords. "For me as a hunter in this part of the world, the natural world is boss", says Julius Ignatiussen in conversation with the Goiserer. At the same time there are hunting and fishing treaties that are indeed meant well, but disregard the reality of life in Greenland. Poverty, unemployment, alcoholism, an enormously high suicide rate are consequences. Some are also hoping for climate change, as it melts away the ice, beneath which many natural resources lie. "Then there won't be any more hunters, only workers", says Ignatiussen. In the evenings the bright promises from across the world draw people to the television. But outside is darkness and uncertainty. Or the demand to play, where the temperature difference of the civilisations is apparent. In the village of Semiligap, 200 inhabitants, 100 huskies, only accessible by ship, sled or helicopter, the film crew plays football on the ice with the children beneath the aurora. The children are in sweatshirts, the guests in functional clothing.

"The problems are so complex that they're not easy to explain", says Weisz on the shoot in Greenland. He makes the problems picturesquely clear in Gegen die Stille. He never slides into the tone of consternation, for his observers, the Goiserer and often Peroni too, are keen, sober observers.

The Goiserer's astonishment at what he has experienced is noticeable. "I want to understand the incredibility that thousands of years ago people settled voluntarily in a place like this", he says. Sussing out this riddle is difficult, because the people are private. The openness with which some of them talk to the Goiserer is thus all the more remarkable. "You have to get involved with the people and confide in them - and you can do that here 100 per cent", says Weisz of a degree of helpfulness that he has never experienced anywhere else.

Despite all dilemmas one encounters in Greenland, the film never succumbs to the temptation of a western socio-romantic view that is often so annoying in documentaries about life in the mystical middle of nowhere; Gegen die Stille is a view of a forgotten world. Life is peacefully observed. And so the film fulfils its title: a region on the edge of civilisation and the edge of what human life can take is taken from the silence of forgetting.

Beyond sound: Goisern in Greenland

Since the hit "Brenna tuat's guat" Hubert von Goisern has been celebrated as a star again at home. The musical world explorer travelled to Greenland for the second time at the end of March - to an almost uninhabited vastness and social tristesse.

Not a note is hit. Hubert von Goisern sings an A again. He gets a lot back from the 20 schoolchildren - but no As. Hubert von Goisern doesn't like playing the teacher. He likes playing music, likes listening to stories, exchanging. It's difficult. Language above all else separates him from from the children in the school in Sermiligaaq. And so as the children try singing, it sounds as though this problem in East Greenland can't be solved with music.

It takes half an hour in the helicopter to fly to Sermiligaaq from Tasiilaq. The helicopter takes ten minutes to there from the island of Kulusuk, and you fly to Kulusuk from Iceland in a jet in a good hour and a half. "You're so much in nothingness", says Hubert von Goisern. There's a tiny supermarket. The school is used as a church too. Visitors are quartered with the locals. The loo is a bucket. There's no running water, there are no streets either, only narrow footpaths lead through deep snow across the small peninsula. There are 50 houses here. 15 of them are uninhabited. Officially there are 215 people living here - and 100 huskies. Sermiligaaq has been stirred up because of one of these dogs: the team from the village has won a championship. A party is planned for when the team returns from a one day journey across the frozen fjord. "Pisaaneq!", cheer the residents, "we're the best!" There's seldom anything to celebrate here.

His own curiosity and Robert Peroni are what have brought Hubert von Goisern to East Greenland. Peroni fell in love with the country on a tour across the ice sheet and he runs the Red House in Tasiilaq. It's a lodging house for adventurers and tourists and a kind of social project.

Peroni employs only natives and gets involved with young people, whose situation is particularly hopeless: no work, lots of alcohol, high suicide rate.

Peroni was looking for someone else who "gets involved with foreign culture and who could perhaps open a new perspective for young people" - and he found the Goiserer. He came into "something completely unfamiliar". It is a difficult undertaking. The people are shy. There are few points of contact.

In Sermiligaaq only Uinaat Uitsatsikitseeq, the teacher, speaks a bit of English. When he translates, it usually takes three times as long as what Hubert von Goisern says. The ice is broken when Hubert von Goisern unpacked long-buried sounds. He is well prepared.

"What I see in him is that people interest him and that he takes his time", Peroni says of the Goiserer, who visited Greenland for the first time last September. "The requirement for understanding this kind of the unknown is giving yourself up to it with every openness", he says, but corrects himself straightaway: "Well, you can't understand it completely, but you can try."

Hubert von Goisern plays recordings of old Inuit singing on his laptop, recorded in the region in the 1920s by the Danish ethnologist Knud Rasmussen. They are Shaman drum dances and songs that developed in a kind of competition concerned with holding one's opponent up to ridicule in song - comparable with the gstanzls of the alpine region or rap battles: sung conflict settlement.

There are only a few "artistic" traces in the history of the Inuits. The hardness of a region of ice and a short summer, as well as the constant fight for survival offer space for little more than surviving. The half-nomadic people had to master the modern trend in just a few decades. Traditions passed down through the generations were left behind. "Now the children are learning languages and arithmetic and other things with which they basically can't do anything in the hard surroundings", says Hubert von Goisern.

While the old recordings are playing, a few students start to sway in time. They are movements that you can see in the old films of Knud Rasmussen. No, nobody does that any more, says one of the students. They've never heard it before, but they know who it is, the great grandfather of that person and that. And the uncle of someone they knew wrote the song.

Hubert von Goisern plays two concerts - alone, with just guitar or accordion. One in Forsamlingshuset in Sermiligaaq, one in a bar in Tasiilaq. The audience gets moving whenever he unpacks his accordion. There's a touched atmosphere during the yodels, as if the listeners recognise something familiar.

In Tasiilaq the Goiserer met the school band. They play him a few songs - including one by the Greenland band Nanook. Nanook allow Greenland traditions to be heard in some songs. The Goiserer wants to know from the students whether they would put Greenland influences into their music. They answer politely that they wouldn't. But they look as though they want to say: how could you think of doing such a thing?

They play the rock music that the satellite dish brings into their houses. It is the music of unreachable distance. The school band plays Knockin' on Heaven's Door. Hubert von Goisern picks up the accordion and joins in. The Dylan song proves itself to be a universal language. For one song the differences are put aside.

A few days previously, in Sermiligaaq, something else came from a musical confusion: the Andachtsjodler. Or at least a rough draft. Then Hubert von Goisern says that he is flying home now and that he will return. The students listen to the translation, stand up and all hug him. "It's a start", says the Goiserer. But it needs "time, the continuity that creates trust." He is planning the next journey for the winter.