How the time flies … the Zeiten & Zeichen Tour is now history and we are looking forward. Hubert von Goisern will be giving concerts in 2023 too – with exciting outlooks as well as looking back over the previous decades of his creativity. For the old signs have lost none of their validity. Nobody knows what the future will bring. But this much is certain: it'll be loud, energetic and intense. Prick up your ears and let's go – preferably dancing!

The Hubert von Goisern Culture Award for the advancement of talent and perseverance will be awarded in 2023 for outstanding commitment and achievement in music. Together with his jury Hubert von Goisern is once again on the search for pearls in the Austrian musical landscape - people whose contributions deserve a wider audience. The award, which is endowed with €15,000 per year, is intended to help promote the recipients' work so that they may continue to enrich the lives of those around them - whether with their own creativity, or through their passionate support of artists. Applications for the Hubert von Goisern Culture Award 2022 can be submitted from 1 October 2022. Deadline for submissions is 31 March 2023.

Find out more about the Hubert von Goisern Culture Award

Music and thoughts for those with a head for heights

Hubert von Goisern joins Freies Radio Salzkammergut, with a new music programme hosted and produced by the musician himself. The first episode of Steilklänge – Radio für Schwindelfreie airs on 14 August 2021. Hubert Achleitner, alias Hubert von Goisern, will be taking his listeners with him on both musical adventures, and poetic and philosophical journeys through time. Steilklänge will be broadcast every second and fourth Tuesday in the month and each show will be broadcast on local radio, as well as available via live stream and podcast for listeners worldwide.

Steilklänge - on Freies Radio Salzkammergut from 14 September 2021 at 20:00
Find out more about Steilklänge and listen to the trailer

Author Hubert Achleitner alias Hubert von Goisern is taking his debut novel Flüchtig on book tour. Through the summer, readings will be taking place in Austria and Germany under the applicable COVID-19 restrictions.

The bestselling hardcover novel spent 10 weeks at the top of the Austrian bestseller list and is a wise and very musical exploration of love and longing, fate and fleeting bliss, which will also be published in paperback by Goldmann Verlag on 20 September 2021.

"The encounters with these people were as fleeting as the plucked notes of the bouzouki.
Nonetheless, each of them left a melody in my heart that still resonates." 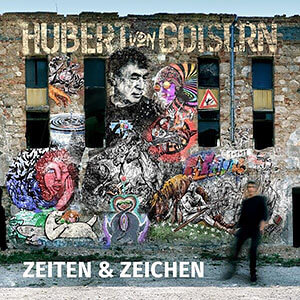 Hubert has been in the studio with his band, in the forest, in improvised concert halls, he has invited virtuoso guest musicians to join him - and he has, we believe, created a masterpiece: Zeiten & Zeichen is of such overwhelming diversity, so dynamic, joyful, critical, considered and punchy, that it is the best, most mature, most spectacular Hubert von Goisern there has been.

This album brings together all of his ideas, the many influences that he has been able to collect over the decades as an active musician, as a traveller and as a person curious about the world. Hubert von Goisern and his musical creations have never been possible to pigeonhole, he has surprised and challenged his audience. The new album is a modern distillate of this musical journey.

What is true? What is false? What is askew - and will it ever be put straight? In Meiner Seel' Hubert von Goisern sings about the blurring of the line between fact and opinion, and how black and white are sometimes just colours. That we should trust. A melancholy song, but full of warmth, soulfully accompanied by a string quartet. A song that leaves you with a sense of hope.

There are stories we don't like to tell and don't like to hear, of dark times and equally dark fates, of inconceivabilities and the abysmal depths of humanity. They belong to the history of mankind, they are a part of us. They don't disappear just because we don't remember them. They are invisible and we run the risk of crashing into them in moments of carelessness. Together with tenor Andreas Schager and rapper DAME, Hubert von Goisern tells the harrowing story of loving life in times of apocalypse.

Hubert von Goisern has never been at a loss for political statements in his songs. And Brauner Reiter deals with exactly what you immediately associate with the title: the misfortune into which a society plunges, if it gives free rein to right wing movements. And there's the promise that everything will improve if you let go of backward thinking. All packaged in a dark, punchy rock number with hard guitar riffs and pounding rhythm. Ominous but forgiving. Dark, but stirring.

Hubert von Goisern is back! After years away from the stage, A Tag wie heut is the Austrian's new single. A raw, pretty forthright rock number, without a lot of hoopla, but with a beat that gets you dancing. And with a simple, but urgent message: no matter what skin colour, denomination, or political position we have - we're ultimately all the same. In times of crisis and in times of joy. A statement that couldn't be any more fitting or relevant today. 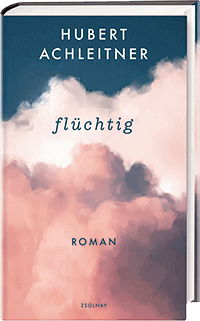 Flüchtig (Fleeting) is the first novel from the pen of Hubert Achleitner, better known to many as the musician Hubert von Goisern. The book will be published by Zsolnay on 25th May 2020.

Maria has disappeared. Herwig, to whom she has been married for almost thirty years, hasn't heard from her in months. The fact that she quit her job and took his Volvo at least gives reason to hope that she's still alive. But what has happened to their marriage, their love, their life together?

Hubert Achleitner sends his protagonists on an adventurous journey, which takes them from the Austrian mountains, across Europe to Greece, and which above all turns out to be a highly emotional inward journey for them both.

A wise and very musical novel about love and longing, fate and fleeting bliss ... "The encounters with these people were as fleeting as the plucked notes of the bouzouki. Nonetheless, each of them left a melody in my heart that still resonates."

Platinum Bestseller: Flüchtig has been awarded platinum for sales of more than 35,000 copies, and after spending ten weeks at number 1, was Austria's #2 bestseller in hardcover fiction for 2020!

Hubert von Goisern and Conchita at the Climate Kirtag

On 28th May Vienna's Heldenplatz will transform into a fairground for climate action. As part of the Austrian World Summit, the Climate Kirtag will be celebrated with music, international cuisine and stirring addresses from speakers such as R20 founder Arnold Schwarzenegger and climate activist Greta Thunberg.

Musical support for climate action will come from not just Pizzera & Jaus, but also the inimitable Conchita ... and as special guest, Hubert von Goisern will be performing live on stage with Conchita! Entry is free – don't miss it, we can all be Climate Action Heroes!

Find out more about the Climate Kirtag

The Amadeus Awards nominations have now been announced and we are delighted to say that Hubert von Goisern has been chosen by the Austrian music award's expert jury once more. After the success of the double album Federn Live, which was flavoured with country, bluegrass and zydeco, Hubert is nominated in the category Jazz/World/Blues! The winners will be announced on 26th April at the Vienna Volkstheater. 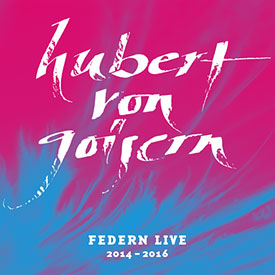 The finale encore of the Federn Tour may have been played, but now fans can get their hands on the perfect memento of the many concerts that took Hubert von Goisern and his musicians across Europe and across the Atlantic: the live double CD Federn Live 2014-2016 is out on 21st April 2017!

Figurehead of the Licht ins Dunkel 2016/2017 album is Hubert von Goisern, who graces the cover of the fourth annual edition of the charity's compilation CD. More than 20 diverse Austrian artists – established stars and newcomers alike – alongside HvG have donated their music to this good cause. For each album sold, 5 Euros goes straight to Licht ins Dunkel. It's a musical treat that both sounds good and does good!

Winner - Male Artist of the Year

On 3rd April the Volkstheater in Vienna once again played host to the great and the good of the Austrian music scene when the Amadeus Austrian Music Awards brought together artists from across the musical spectrum. With the votes from the public and the jury counted, Hubert von Goisern was announced as the winner in the category Male Artist of the Year! This win constitutes his sixth Amadeus Austrian Music Award in total.

Hubert von Goisern on tour - in Europe and the USA! 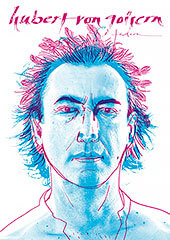 Hubert von Goisern and his band will be on the road again in 2016, taking the Federn Tour 2016 worldwide. The album Federn was the result of musical expeditions to the southern states of the USA, where Hubert von Goisern soaked up the musical heritage, the blues, country, jazz and Zydeco to be found among the swamps of Louisiana and in the home of country music, Nashville, Tennessee. These rhythms and sounds didn't need to be cobbled together, they fit like a glove with Hubert's Austrian sound - as if there had never been any other way.

And now Hubert von Goisern is taking this fusion of the Austrian Alps and the American South back across the Atlantic. In March 2016 the Federn Tour has its premiere in New York. After two dates in the Big Apple, the whistle-stop tour heads to Washington D.C. and finally the renowned South by Southwest Festival in Austin, Texas.

European audiences can catch the tour in late summer and autumn, when HvG and his musicians play 20 dates through Germany and Austria. 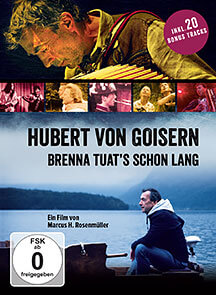 Hubert von Goisern has been playing European stages for a quarter of a century - as Austria's musical ambassador, as an innovator of folk music, as someone who dusts off the traditional and as an individualist. Quite simply: as himself. Hubert von Goisern has never done what was expected of him and has found success that way. With Brenna tuat's schon lang director Marcus H. Rosenmüller has made a documentary that portrays Goisern the man up close and personal.

Since its release in April, more than 65,000 people in the German-speaking region have seen the film on the silver screen. On 30th October Brenna tuat's schon lang will be released on DVD and Blu-ray with more an hour of bonus material and subtitles in German and English. (Entry into the music DVD charts: at #2 in Austria and at #8 in Germany!) 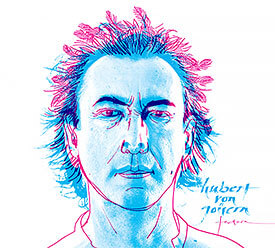 Hubert von Goisern has the blues. Hubert von Goisern also has: variegation and the shimmering energy of New Orleans. This special southern states feeling. He balances all this on the basis of his own tradition, which comes from the Alps in terms of geography, but is practically the whole world in a musical idea. The new studio album Federn will be released on 8th May 2015.