The three South Tyroleans with a licence to sing

Maria, Elisabeth and Marlene: those are the names of the three South Tyroleans who currently stand on stage with Hubert von Goisern, perfecting with sound experience with their voices, instruments and hearts. All three have been involved with music since early childhood and have already gained experience with other musicians in a variety of musical genres. 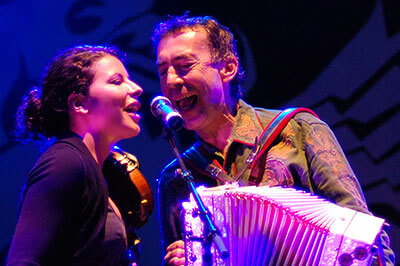 Marlene has been in the band for six years. A friend had heard that Hubert von Goisern was looking for a singer. As a result he organised contact between the two. Marlene met Hubert in Salzburg, they sang and played together and a few days later it was clear that she would be joining him on tour.

"I like playing music with Hubert, because he's a great artist. He always has very interesting projects. He is open for everything new thing and makes our traditional music accessible and interesting for young people too", Marlene says. The touring is enormously important for her: "I'll never forget how we played for the Tuaregs in the Sahara, or on the Cape Verde Islands ...", she enthuses.

Elisabeth had met Hubert through her sister Marlene and has been part of the band since last summer, whereby her decision to join was at first a difficult one, as she is actually a classical singer. But now she is very happy, because the stage experience is definitely valuable for her classical concerts too.

"Working together with Hubert is great, he gives each band member lots of space, places great value in the opinions of everybody and has a good eye for picking band members and the whole crew. The solidarity is always super", says Elisabeth. Now during the winter she will however be dedicating herself to classical music again, lined up are: Christmas Oratorio, Mozart Requiem and opera galas in Germany, Switzerland and Austria. From April she will be on tour once more with Hubert von Goisern.

Maria, the youngest in the troupe, has been on stage with Hubert and his band since 2007, Marlene recommended her to him as he was looking for additional female singers for the Linz Europe Tour. She came along to a rehearsal and joined straight away. Maria too is enthusiastic about both the musical and geographical journey.

Maria, Elisabeth and Marlene have known each other since they were small, they are cousins and grew up together in La Val. In recent years they have played music together a great deal. The three are on the same wavelength, both musically and personally speaking. Incidentally, the three women are currently writing their own songs, mainly in Ladin. Very much their own sound, which will probably soon be recorded in a studio too.