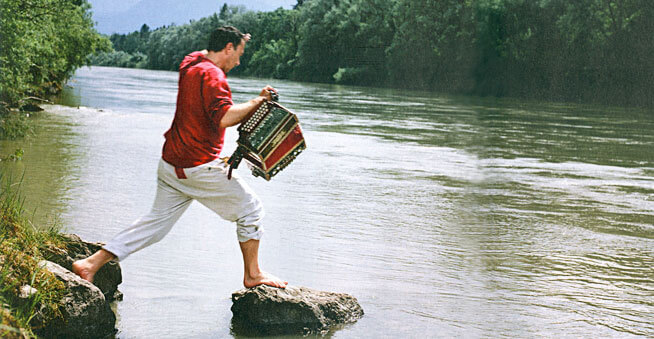 Of course we don't meet him at home in Salzburg, Hubert von Goisern is on the road again, this time on a ski trip with a few friends in Grindelwald. We have agreed to meet in a hotel with a view of the almost 4000 metre high Eiger. Von Goisern is an intense person, melancholy, but curious, thoughtful, but full of drive. He often thinks for a long time before he answers, he reminds one a little of the mountain outside: massive, secretive, challenging. You can conquer him or fail, but can you can also just find him fascinating.

You've lived in South Africa, Canada and in the Philippines, toured through West Africa with your band, met the Dalai Lama a number of times. What has been the biggest adventure of your life thus far?

It's always been whatever I'm in the middle of. But if you need an answer, then it is the adventure of family.

What's so adventurous about it?

Three months in Tibet are exciting, but 28 years at the side of the same woman are more exciting. To watch the children growing up, to give them values to take with them, and to see that people hit boundaries – and indeed their own.

What boundaries are these?

Children are merciless reflections. I think I used to be a good bit more egocentric than I am today. The fact that I was often away is one thing, I often didn't even have any understanding for the wrench my children or my wife felt when I left. I didn't let this feeling in at all, perhaps because I was afraid that I wouldn't be able to travel any more.

My son never judged me, he didn't know any different, but when my daughter was born I suspended my nomadic lifestyle in order to be with her. When I then went back on tour, I had to better explain to her why I was suddenly away for months at a time. I hadn't faced up to this conversation and that was cowardly.

How many days in the year are you away?

Often this year. There are 100 concerts on the books and I'll be going to Greenland twice. I was invited to explore the identity-affirming power of music with young Inuits. Greenland is at the end of the world. There are no trees, no bushes, only rock, water and ice. Nonetheless people live there, who have their own language and traditions. Faced with the changes that our world undergoes, this way of living has no future. The young people there are desperate, the suicide rate is horrifyingly high. So I'll be organising workshops, playing music with them and talking about the meaning and nonsense of traditions with them.

A tour is tiring enough, why are you doing this?

Can you say no when you are asked to get involved in such a situation? I live in an insulated, energy-efficient house in Salzburg and am completely urbanised. But perhaps because I spent the first 20 years of my life growing up in the mountains, I like going to people who live on the boundaries of civilisation. I want to preserve the closeness to one's origins and the feeling of humility.

Greenland's not the only place you can get that.

Sure, I could also go up to the Dachstein glacier, but that's different. I don't go looking for the extreme situations in a bivouac. I look for people who live at the intersection of nature and civilisation.

Have you never had beach holidays with your children?

Yeah, when they were younger, but that's not my cup of tea. I don't like crowds, I don't like joining the queue of cars heading south and I don't like lying about with other people on the beach. These holidays were the critical phase of our relationship each year. Now the kids are out of the house and we do other trips, to Lappland for example, where we travel an isolated river with a canoe.

You swing constantly between nature and culture, being on your own and family, adventure and security. It's an enviable model of living, because you avoid the monotony of everyday life.

It was certainly courageous to form a family, particularly on the part of my wife. She got involved with me, although she knew that I lead a non-peaceful life. It took me a long time to find such a wonderful woman who accepts me the way I am and gives me my time away. My first two marriages didn't last long, because I acted like a classic family guy.

Do you call your wife every day when you're away?

At first, sure, but after a few days I find my own rhythm, then I'm really away and we drift apart and often don't have any contact for a long time. But it's not a problem, when I return we quickly find our way back to one another.

In an interview you once said: "I don't want to always know what I'm doing." What did you mean by that?

A lot of what I do, composing, singing, travelling, has only partly to do with a rational plan. If I start to justify to myself, why I'm doing this or that, I'll have lost.

Absolutely, not just in music, but in travelling too. I leave the path in the mountains, I follow my instinct, but I can't explain why I'm going left or right, I'm simply pulled in a certain direction. If someone's accompanying me, they need to follow me, I don't like to ask them to do so, so I prefer to go alone.

Do you still meet up with old friends from Goisern?

Yes. But in earlier times I got on with only a few people, most people thought I was aloof and wanted to manipulate me and tell me what to think. But I was a dreamer who liked staring out of the window. There were only a few people I really liked. Some of them still live in Goisern and I'm still friends with them.

You've seen the world, the others stayed in Goisern – do you not become strangers to one another?

Of course I have a head start on experience. But on the other hand my friends have one over me in other things, such as the continuity with which they live their lives. Their calmness is good for me.

How often do you go to Goisern?

When I'm at home in Salzburg, I go there often, it's only 70km away. I have a little house there, right up at the edge of the forest. If it's not raining, I make a fire in the courtyard, look up at the stars, think and feel within me. I need this kind of cloister from time to time.

Does it fill you with pride to be considered the founder of alpine rock?

I'm proud to have written a few songs that have touched many people. I was in the right place at the right time and have certainly contributed to breaking up the encrusted alpine music feeling, out of a kind of anger. I wanted to tear apart and destroy the kind of chauvinistic folk music I knew.

And then you wrote your huge hit Hiatamadl …

… about which interestingly only men talk to me.

Perhaps because women are not as objective as men. The song is after all loud and in your face.

You play guitar, accordion, trumpet, flugelhorn, piano and a few more instruments. How do you compose your songs?

I've written pieces where I fished a bit of paper out of the bin on the underground in order to write down a few notes. With the last record it was even the case that whole album developed over a year in my head. I didn't touch an instrument out of the fear that the ideas could crumble as soon as they sounded out loud. I've also composed songs on a flute that only has five notes. With creative things it's sometimes helpful to constrain yourself. If you can only play five notes, you need to come up with the others yourself.

You're going to be 60 in the autumn. Do you want to do anything different after this birthday?

Actually this date isn't significant, but since I'm continually asked about it, it's involuntarily become a subject. I'll have to think of something. Perhaps I won't give any more interviews. Or I won't go on stage any more.

Could you actually exist without shows?

Composing and producing, no – but I don't necessarily need the stage. I wouldn't get bored.

It seems as though change is one of your life principles.

I've always shed my skin and need a certain sense of risk, otherwise I'd get dull. When I expose myself situations that are incalculable, I wake up and am highly concentrated. That's why I've always looked for the stage, I have such great fear of making a mistake, of letting down my defences, that I'm completely there. That's not always been a good feeling. I realise now that I've freed myself.

The risk of the stage has played its part, it's become routine. I would never have dreamed it, but I can feel how I melt together my family, my friends, my home and the settledness to a warm, glowing point, which draws me to it me ever warmer.