"No-Place Like the Future – Artists Evoke a World After Corona"
Austrian-American Cultural Project Defies Restraints of the Corona Crisis.

One of the most visible constraints of the Corona pandemic is the almost complete suspension of our freedom to travel around the globe. In order to maintain the transatlantic cultural exchange and dialogue in these difficult times, the Austrian diplomatic missions in the United States initiated the cultural project No-Place Like the Future – Artists Evoke a World After Corona.

Fifteen pairs of artists of various fields, based in Austria and the United States, were invited to come closer virtually in the time of lockdown and social distancing, in order to think about a post-Corona future and to create a piece of art together.

One of those partnerships is between Hubert von Goisern, Bob Bernstein and Enrique C. Martinez. You can now watch their conversation, as they discuss the consequences of the corona crisis, as well as the possibility of a cover of one of Hubert's forthcoming songs Eiweiß, which will be included on the new album Zeiten & Zeichen and tells the story of polar bear on the search for protein (Eiweiß).

The works created throughout the project will be presented during a virtual vernissage in early June. Everyone is invited to follow the creative process from the beginning to the finished artwork at www.noplacelikethefuture.org 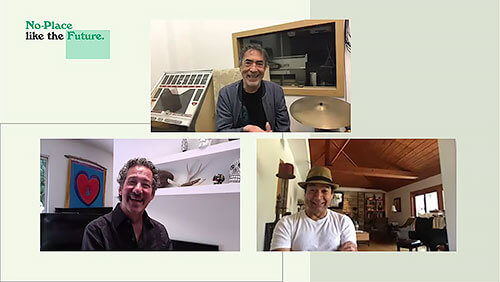