"Only in freedom can there be passion"

Long before Hubert von Goisern became famous, his wife demanded that he separate from his other love - music.
She could just as well have said: stop breathing. 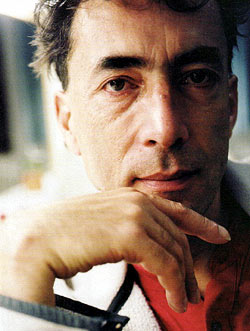 Perhaps she had foreseen which spirits he was capable of calling with his music. One thing is certain:

When she kissed him for the first time, on this summer day in the swimming pool, she had not yet got in the way of the guitar. Her name was Ingrid and because she was the first girl who had wanted to kiss him, says Hubert von Goisern, he married her. It did not last long, and Ingrid felt robbed every hour that he spent playing music with any type in cellar bars. Why did he need that when he had her? Given this choice, says von Goisern, he let it be playing music. And not once had he at that time known that this woman might have well as said: stop breathing.

Always - even as a child - this strength had been there. But it was suited for nothing that had validity. It stood in the way, was awkward, had to be kept in check, von Goisern did not want to attract attention. Who should say to him that he loved to go home in the dark, because then the streetlights, the stars, the lights in the windows turned to sounds, to melodies? Who makes it clear that at a certain hour, the little village deep in the Salzkammergut fills with orchestral sounds? What was that for a youth who began to howl when he heard music, and who in school was not in the position to concentrate if outside the trees changed their colours or the clouds their form? What was the use of it, this over-extravagant energy, if one could not shape it in performances, good notes, appropriate behaviour, meaningful career aspirations? Everything was excessive to Hubert. Had his father been right to be angry? Hubert von Goisern felt his inadequacy.

So Ingrid was a piece of luck, and that was not meant to be wasted. For otherwise nothing was right in von Goisern's life. On the wishes of his parents, who would have liked to have seen him as a doctor or a teacher, he at least became a chemistry laboratory technician. After three and a half years vocational training, in which the laboratory was burned down twice and flooded once, which von Goisern was truly sorry for, all those involved were full of despair. Von Goisern knew no way to help other than to disappear. With a suitcase, a holdall and Ingrid, he emigrated to Africa. 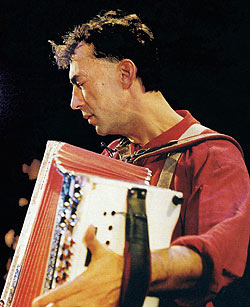 They were there for four years, travelling about and having jobs. Four years in which Hubert von Goisern had not looked at a musical instrument. And then, still in Africa, a friend spoke to him, he had once played in a band, they needed someone for two or three appearances, did he feel like it? He did. And so he found himself on a stage in South Africa at New Year 1978/79 in front of dark-skinned workers of a quarry, who collectively drank and danced themselves out of their minds.

First of all they played Boer folk music, and then everything that came to mind - up to Carlos Santana and Creedence Clearwater Revival. In the middle of this absurd scenario, says Hubert von Goisern, it became clear to him what he had to start with his life. That was the end of the marriage to Ingrid. Her need to be his single passion had not been a good idea.

They went back to Austria, where Ingrid still mobilised the family to bring her husband to reason. Everyone clapped their hands to their heads - to become a musician! -, only the brother had said: "There have to be such people." But even without encouragement, von Goisern was ready to leave everything, parents, the village, the brass orchestra, wife, the whole little world into which he had tried in vain to fit. Letting go meant exposing oneself to the weather, says von Goisern. The antithesis of freedom. But only in freedom could there be passion.

Von Goisern wanted to go to Vienna. Yet in Bad Ischl, not ten kilometres from his village, Kate, a tourist from Canada, stood in his way. Kate was an artist, more certain than Hubert and she basically knew what she wanted. She wanted Hubert.

At that time, Billy Joel sang "Vienna waits for you" and von Goisern thought: "he's right", and went to Canada with Kate. Kate taught him to read books, be shameless, to iron and to talk about things like truthfulness. But above all she understood his necessity to make music simply because it was necessary for her to paint. But unfortunately with both their own individual necessities taking up space, at some point they began to argue about space. And they argued like they loved - to the finish. They were two who collided. 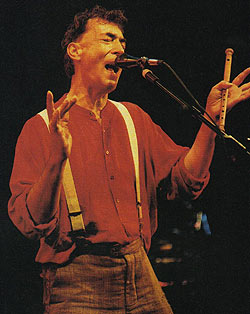 Forces, which if everything went well, could lead to the most unbelievable resonances, but as soon as they overlaid moving in opposite directions, eliminated each other. Back in Vienna, they separated over breakfast. But this love was of a kind that deposited in one's own rock, that became part of one self. Stumped by women, von Goisern from now on finally decided to dedicate himself to the priority of music. He was 30 years old. Vienna with its aura of joie de vivre and morbidity seemed to be the right place for him. Von Goisern allowed himself ten years to become what he saw himself to be. Ten years in which it was not permitted to throw in the towel. If at the end of this period he still did not know how to pay the rent, then he would give up. That was von Goisern's deal with von Goisern.

And that worked satisfactorily. From the third year on, he says, land was in sight. He composed for dance theatre, added soundtracks to industry films, studied experimental music and electro-acoustics for a short time, practised, composed, appeared in clubs. In the "Roten Engel" with a "stage like a traffic island", he learned that he was in the position to play in such a way that the waiter let the cappuccino machine rest and the public held their tongues.

With astonishment he had to realise that it worked better the more consistently he translated the ideas that were in him. The more egocentric - not more egotistical! - his action, the more coherent the world. He had begun to look into native folk music and gather musicians around him with whom he could translate these compositions into action. He had stopped listening to the whisperers, he says, who always know how it goes. And suddenly he was considered a personal tip, and even more suddenly, he was high in the charts with his band, the Alpinkatzen.

In this time, but still before big success, von Goisern met the person who is today his wife. He did not notice her from the stage, but they met at ground level in a seminar room. Hildegard is a teacher and when he saw how she worked, he says, he did not only fall in love with her, but with all the children. 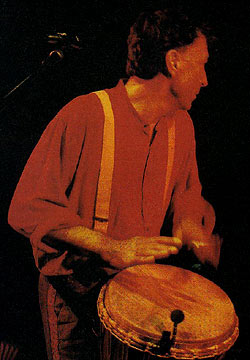 Three years later, Hildegard and their small son were with him in the studio when von Goisern recorded the first CD. Their presence, he says, did not mean a diversion, but strength. Nevertheless, there are many weeks, sometimes months in which they must get along without each other, because his ideas drive him away, to Tibet, Africa or also just into his thoughts. But she was one who doesn't wither next to him, strong enough to take her own free space, strong enough to leave him to his. They have, he says, an independent existence in head and soul, and only in this way could two people love each other. Tighten, push off, tighten, getting lost in the hope of always finding each other again. Whoever says that goes without pain is lying.

When success, prestige and income had finally legitimised von Goisern's different quality of life, the people immediately formulated their new expectations on this basis again. So you are an alpine rocker, who sings Hiatamadl with which you can fill whole halls, so then do it.

Inevitably, says von Goisern, the point came for him when he had to say: No. I was that yesterday, I am different today. He said it at the high point of success and thereby once again exposed himself to the weather. Not just a rainstorm, but minus degrees and darkness for an indefinite time. For where yesterday, there was an infrastructure of a life, there was nothing from day to day. But above all there was nothing in him. Often he just sat there and waited for time to pass. Those are times in which almost everything moves away.

Whoever feels the uniqueness, says von Goisern, knows the unrepeatability with the same force. One must be able to bear both - also as those that divide these moments. To weigh enrichment and pain against each other would be left to everyone.

Basically, von Goisern says, it was his wife who after many years pushed him on stage again. She knew the reason for the migraines, stomach cramps, phantom heart defects and depression. It is also she who keeps an eye on the happiness of the two children when he is on tour and is making other people happy in other towns for an evening. But without a doubt, a good many songs are for her.