HOW MUCH POWER DOES ART HOLD?

How much power does art hold?

The exceptional artist within Hubert von Goisern wants to open the hearts of his fans. The wilful man polarises people with his socio-critical and extravagant folk music. And Hubert von Goisern met everyone's expectations at Medien.Mittelpunkt in Ausseerland too, not far from his hometown of Bad Goisern. 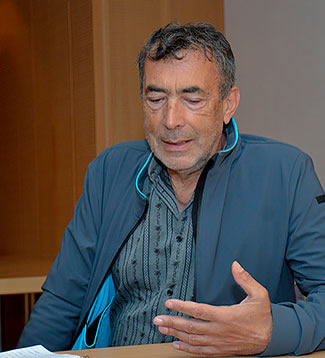 "There was this huge head wind when I start playing music" - the alpine rocker Hubert von Goisern wanted to be playing his own kind of music even when he was still young. To be interpreting things in a new way, the accordion for example. The first accordion was a gift from his grandfather, which he nearly ripped apart one time, drunk on schnapps. Back then the singer-songwriter still regarded the instrument as a symbol of the "stick-in-the-muds". Nowadays his concerts are unimaginable without the accordion. The former street musician now has great international success. There's one thing that hasn't changed though, in spite of his many years of experience on stage: he gets nervous before every show, he says.

From the orchestra to yodelling headhunters

Hubert von Goisern, real name Hubert Achleitner, was born in Bad Goisern in the Salzkammergut in 1952. As a preschool child he dreamed about being a conductor. He describes his childhood as "very happy" up until the moment he had to go to school when he reached the age of seven. "That time was terrible, because lessons are no good for a dreamer", says Hubert von Goisern. "My life only continued when I was done with school. It was there that I learned standardisation for the first time", says the 63-year-old. As a young boy he was thrown out of the orchestra, because his hair was too long. At that time Hubert von Goisern had no interest in folk music. That changed in the 80s, when he spent six months living in the Philippines. There he taught headhunters how to yodel with great enthusiasm.

Music and art play a decisive role for the pedigree musician, which he describes are being greater than that of religion and politics: "For me, art is a kind of magic. So I don't want to give people any answers with my music, but rather create free space in their heads in which they can find the answers for themselves." A person's own freedom has been important to the alpine rocker since his childhood and he values it even more now as a musician: "Art is something pure that exists for its own sake. As an artist you have this chance to follow an idea and put it into reality."

At Medien.Mittelpunk Ausseerland 2016 Hubert von Goisern and other high-level creative figures were posed the question: how much power does art have? For the alpine rocker at least, "power" comes from "creating": "If you only ever just watch, you can't take the right to decide what other people should do. I'm very happy that nobody can tell me what I have to do. The greatest power for me is freedom."

Music that opens the heart

Hubert von Goisern makes no secret of his political stance; he has been an avowed supporter of the Greens for years. His support for Alexander Van der Bellen in the Federal Presidential elections was therefore no surprise at all. The decision wasn't an easy one for him though: "I have a hard time telling other people that they should vote for a certain person. Everyone should make that decision for themselves. I only became active when the campaign starting getting ever dirtier." The Green-sympathiser considers the accusations made during the electoral campaign to be "Nazi methodology". "It's what Haider demonstrated, because it sticks."

Hubert von Goisern's management helped to organise the solidarity concert "Voices for Van der Bellen". Musicians from all genres supported the green presidential candidate with their guest appearances. As the exceptional artist talks about it, he enthuses: "Competitive envy in the music business is often very sizeable. But at Voices for Van der Bellen everyone put their ego into the background and put themselves into service for the good cause. It was a great and impressive experience." His hit Heast as nit could also be heard in the election video. In contrast, he doesn't his his songs played at FPÖ events. In 2006 Hubert von Goisern wrote an open letter to HC Strache. "I don't want FPÖ messages to enter people's hearts. My music works in that I open hearts." This other kind of politics is something that Goisern "simply can't stand".