Hubert von Goisern is patron of the new refugee project 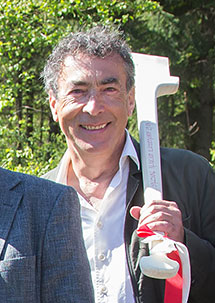 Ground was broken on 29th April for six new refugee homes on the riverside builders' yard plot in Salzburg. A contribution of 500,000 Euros from the campaign "One more roof. Five fewer refugees" has made it possible for the first of a total of six wooden houses for refugees to be erected on the ground of the former builders' yard on Alpenstraße 155. Building costs for all six homes will total 3 million Euros.

Patron of the first house is singer-songwriter and world musician Hubert von Goisern: "The acute refugee situation can't be meditated away, or prayed out of the world. It's necessary to think about it and to talk about it. But there comes the time when it has to be dealt with and one has to do one's bit towards peace. Solidarity with people in need is essential if we are to take our own humanity seriously."

The Red Cross has taken on the erection and management of the temporary accommodation and the new homes have been made possible by the "Österreich hilfsbereit" (Austria ready to help) organisation and the countless countrymen and women who have made donations to the project.

The six wooden houses for up to 243 residents are being constructed according to the model of the refugee quarters in Seekirchen am Wallersee and Tamsweg. The intensive management covers 24-hour support, self-sufficiency and targeted integration measures, such as language and orientation courses, leisure facilities and employment opportunities.

For Christian Konrad the project in Salzburg should be "a trigger for further initiatives. We need as many individuals and companies as possible who are prepared to implement projects. Refugees in Austria are still being quartered in oversized accommodation in some places and people are still coming across the Austrian border looking for protection. More than 17,000 people have already applied for asylum this year, around 1000 applications are coming in each week at the moment."

The wooden homes will be set up in a very short time and can also be disassembled, reconstructed and used again. Red Cross Salzburg has already created humane accommodation for more than 150 people in Tamsweg und Seekirchen, who are waiting for the approval of their asylum application. 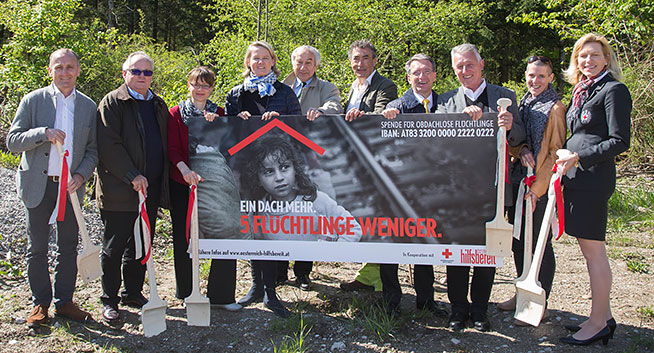 The subject of refugees polarises people like nothing else. What's your take on the situation?

On the one hand there are the statements from those in government. They don't give anybody any courage. Thinking about Chancellor Faymann, when he presented the new asylum law with his head bowed: he was actually ashamed. Something like that doesn't give you the impression of competence. So now the law has passed and he isn't happy - what use is that? On the other hand there are many people who are getting involved with refugees. There are enough people about whom you hear nothing, because they're just getting on with it.

Many people saw the first vote for the new Federal President as a refugee vote. What do you think of the result?

There was always talk of it as an asylum election. But that was just one of many subjects. The result is a sign of the general unhappiness with the government. The positive thing about this situation is that it won't help for the Reds (SPÖ - Social Democratic Party) and Blacks (ÖVP - Austrian People's Party) to turn blue (FPÖ - Freedom Party). The voters don't want that either. If they want the general rejection of everything foreign then they'll just vote for Strache anyway.

People choose the real thing over a substitute . . .

That's what they say. But when people want shoes, they have to go to the cobbler, when they want to put on something that fits properly, they go to the tailor. You don't need a "real thing" for every old fart.

Do you have an election recommendation?

I'll be voting for Alexander Van der Bellen myself. But everyone should decide for themselves for whom they want to vote. People should consider who should represent Austria: do we want to be back in the situation of international isolation, as under Waldheim or the black-blue (ÖVP-FPÖ) government? I don't want that. But if the majority of Austrians votes for that, you have to say: well, it'll pass.

What does a patron of refugee homes do?

I assume that I have a certain sympathy value and that this carries over to such a project. I want to contribute to this house not just being met with rejection. I certainly won't be making any sandwiches for refugees, but I'll be visiting every now and then once the accommodation is up and running. These are exciting times.