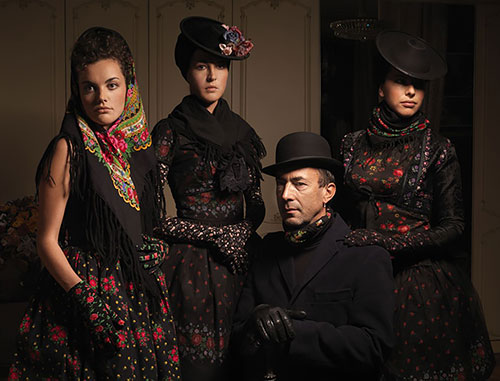 He doesn't think much of fashion - but musician Hubert von Goisern has enjoyed
wearing clothes from Susanne Bisovsky. 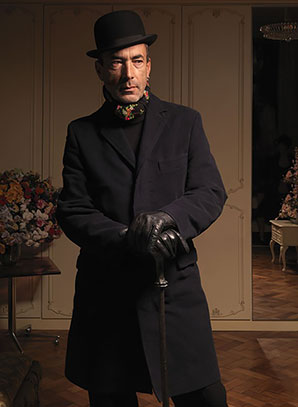 "Along the road to Ischl, right at the little hill, then up-up-up, whenever it forks, take the steeper option. No worries. Everyone finds their way here." There are no distances or compass directions in Hubert von Goisern's directions. But what's the point of being led by a canned voice when you've only got to look to see how to get to where you need to be?

So up-up-up, then right and there it is. The little Goiserer house. It stands alone, but isn't so far off the beaten track that you couldn't raise the next neighbour with a hearty yodel. A dark wooden door with a wrought iron doorknocker, to which you would no doubt stick when it was really cold. But not today.

The fog in the Salzkammergut has made an exception in Bad Goisern of all places. The hillside is in the gleaming light of the low December sun that lights up the valley all the way to the mountain that stands opposite. The Föhn makes it as warm as springtime.

After the great journey

At the door waits the master of the house in T-shirt and trousers - comfortable. Hello. Through a hall with outdoor temperature, we go into the little living room with a tiled stove, wing chair, table with laptop and a view across the valley. It's well heated. You can't trust the Föhn.

Hubert von Goisern is here. More being than living. Here after his two long journeys. The first eastwards along the Danube on a cargo ship converted to a floating stage to play with musicians along the way. Then westwards in 2008 all the way to Rotterdam. As part of the programme for Linz 09 Capital of Culture there will be a big finale concert in the coming year. Until then it's time to sit and write about what has happened in the last few years. And time to make oneself a bit comfortable.

Things have to be primarily comfortable so that you can move. That goes for clothing too. On stage in any case. Because he works with a big instrument, the accordion. Wouldn't a normal T-Shirt suffice? "No, it's got to look like something." Exactly. Otherwise Hubert von Goisern wouldn't have made two of his own collections in the first half of the 1990s, when he was still with the Alpinkatzen. Linen, leather, traditional, but not too traditional. Alpine, but also of the world. But fashion design then went in one go with the - temporary - retirement, something that Hubert von Goisern doesn't really regret. "The world of fashion is something very individual. People there are doing their own thing. We fought all the time too."

Collaboration in fashion seems to work with Susanne Bisovsky, the designer of the clothes seen here. The musician and the designer met for the first time in 1995 at a workshop in Saalfelden. She was looking for new contexts for Tracht and he was doing similar things with music. "In 2001 I asked her if she would make me a couple of shirts and pairs of trousers for the stage. She didn't want to make any men's clothes." 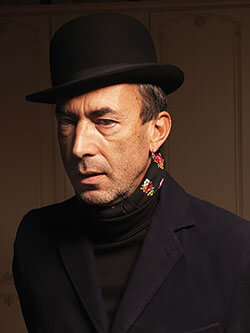 But now she has. Frock coat and embroidered shirts, narrow lines, almost English tradition, dressed up with opulent Tracht elements from the deep east of Europe. More a cultural project that fashion, a fiction of Europe, whose topography was never wounded by barbed wire, a journey on the Danube to the Black Sea, on which a flower was picked every few kilometres, a textile new definition of homeland. These clothes would be out of the ordinary at a Goisern church as well as a Munich Oktoberfest celebration. This kind of homeland perhaps alienates those who think they have sovereignty over the definition of what is foreign and what is native. Hubert von Goisern has been a thorn in the side of such people for so long that you could think they've got used to him. But: "I still get letters in which I'm attacked." He has now announced that he would return his honorary citizenship of Bad Goisern were Jörg Haider to be awarded the same posthumously.

On the other hand many involved with the homeland love him too. Some too much. Heinz-Christian Strache used a song of von Goisern's at an election event. Hubert von Goisern forbade him from doing so. As a result came an exchange of letters with Patrick Haslwanter, head of the Tyrolean wing of the Youth Freedom Party, who said that he had played the song, not Heinz-Christian, and songs by "HvG" were well-loved.

Wyvern in the wind

Hubert von Goisern doesn't let such episodes upset him in his going away and staying at home. A banner was designed for the great boat journey - with the emblem of a dragon. "You have to have something on the ship. There was something fluttering everywhere with logos and company names. But it's not a dragon. It's the wyvern that is on the shield of Bad Goisern too. And I was also born in the year of the dragon." This banner of solidarity with home is now also stage decoration and the musician's logo in a way too.

Up on the mountain in the little Goiserer house there's freedom from decoration. Two weeks before Christmas and no advent wreath and no trumpeting angels. Nothing distracts from the actual. "Christmas - it's like the weather or the mountain up there. You can't do anything about it."

Susanne Bisovsky's Tracht
Few know her abroad. In Austria she's only a name for those in the know. Susanne Bisovsky makes fashion that would receive thunderous applause on the runway in Milan or Paris. But Bisovsky doesn't like to travel. And fashion, she says, is something she doesn't really have any time for. The Helmut Lang pupil, born in Linz and now living in Vienna has been working for 15 years on her (Tracht)-creations. She redevelops them time and time again. Over the years an unmistakeable style has developed. Traditional Tracht, that is constructed and made like couture. The Bisovsky style: the superimposing of the brightest patterns. And because she tailored often for Hubert von Goisern's band, the musician was her first model. She dressed him the way she would like to see him. In frock coat and bowler hat rather than lederhosen and a colourful shirt. A kind of elegant Viennese ponce. Next up is architect Gregor Eichinger. He needs to have his ear pierced first. As simply befits a real pimp.