"I love to surprise myself" 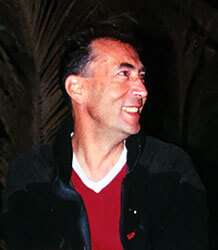 Your musical output has been fairly impressive since your comeback in November 2000: Fön, Trad, Iwasig, countless tour dates and other projects. Where does all your seemingly endless inspiration come from?

I can't say. It is simply that something drives me forward. Certainly pure curiosity too and thirst for adventure, but also the desire to work together with the different people I get to know along the way. It is as if I am following the music. The sounds are like breadcrumbs in the Hansel and Gretl fairytale. They bring me to the next stop in my life.

Your songs have been met with rave reviews and standing ovations, but what is the best compliment someone could pay you?

Compliments always make me embarrassed. I can be pleased when I notice that I make other people happy or thoughtful with what I do, but I can't do anything about my talent. I had that from birth. And I feel privileged to be able to live on my aptitude.

It is great to hear that there is another album of folk songs in the pipeline. Were you surprised by the success of Trad when it was released in 2001?

I hope this doesn't sound arrogant: no, I was not surprised. Before the release I said to Hage that it wouldn't surprise me if Trad was just as successful as Fön. During the production for Trad (I) it was also already clear to me that there must be a continuation because, for example, I had no more room for yodels, but I also had to hold back for some songs because of space.

What will set Trad 2 apart from the first album?

Well, it's really difficult, or impossible even to describe with words. I think it is freer than its predecessor. Not that the first Trad was strict or even conservative, but I, or rather, we have all simply taken a step further.

When do you think the album will be released?

It is planned for September - I think the middle of September. The exact date is not yet fixed, but I am planning a little party on Krippenstein, where the CD also arose.

When recording an album, how much do you have to consider being able to reproduce what you record in the studio live on stage?

Not at all. They are two different pairs of shoes. Until now I have always managed to adapt the music for the stage. Except with the Tibet CD Inexil, since a translation without Tibetan singers would be unthinkable. But when I am in the studio, I do not think about the ability to translate it for live concerts.

With solos such as Reinhard's in Weit, weit weg and Bernd's on Akipenda (live), to what extent do you tell the musician what you want? Or do they have free rein for a few bars?

I am only the corrective for such passages. Saying whether I like something or not. If not, the person concerned must think of something else. But with solo passages the artist largely has free rein.

A number of your compositions, such as Iawaramoi and Katholisch, have been quite daring or controversial. Are you writing these thoughts for yourself, or do you want to make some kind of impact?

In my songs, but also in my interviews, I express my personal feelings and thoughts. To what extent these have meaning goes beyond the subjective, and thus something somewhat generally accepted extracts itself from my assessment during writing. I first know what other people think and feel after it is released and I get reactions.

I think each demand for objective truth is presumptuous. But when we all have the courage to exchange experiences we have in life, we get a picture of what life is.

The most predictable thing about you is your unpredictability. Is this fair comment, do you like to surprise people?

I love to surprise myself. That is indeed the true challenge, to question yourself again and again.

Last year you travelled extensively around West Africa and you are now home again from a return visit to Cape Verde - was it a successful trip?

I/we had a very intensive and great time. And met many outstanding artists. The concert was an event one very seldom experiences. Cautious estimates say it was 60,000 people when we played, others think it was about 100,000. In any case, I have never played in front of so many people before and the fact that we played music seen there as exotic and nevertheless came across very well makes me happy.

What can you learn from these people, both on stage and in the audience?

No idea, it is still too early. I am still under the impression of having been a guest at a really wonderful festival. I love how the people there celebrate, dance, laugh, are lively and in a good mood. Music really means a lot to the people there.

Do you miss any home comforts when travelling?

No, on the contrary. I also travel with only a little luggage and feel accordingly relieved from unnecessary stuff. As Erich Fromm said: having each piece is being a piece less. Travelling I do not have much and am often more exactly because of that. Know what I mean?

This summer sees you embark on a tour which includes some joint concerts with Mohamed Mounir, the Egyptian artist with whom you performed in Assiut last year. What are your hopes for the tour?

A great, exciting, time together. A better reciprocal acquaintance, and an interest on the side of the public, so that that meeting of cultures does not just take place on stage or among the musicians, but also in the audience. Mind you, at the moment the advance ticket sales look rather towards rejection. But I also hope for good weather so that we don't go swimming (in the figurative sense).

How do you practise when one musician is in Austria and one in Egypt?

I don't know. We will see and find out when we meet on 16th June in Ischl and begin practising.

What does performing on stage release in you? It must be very important to you, for you to endure the stage fright every night of a tour.

Desire, energy, all my dreams begin to come to life, all worries and fears dissolve. There is no tomorrow and no yesterday any more: only here and now.

Yes naturally, one is more intimate, the other freer and also often a little less formal. But you can't generalise it. There are also open airs which take place in a "room", for example in a castle inner courtyard, or on a town square ..., on the other hand, there are large halls like the Vienna Town Hall or multipurpose halls which are put up mostly for sports events, where it then also becomes unmanageable.

You must be recognised a great deal in public. Where can you enjoy a degree of anonymity? How do you keep your feet on the ground?

I was never one who liked to look for public situations with lots of people. I spend the free time with friends and family, or stretch my legs, usually alone, in nature. And I have learned to insert a kind of filter on my senses, which protects me from reacting to everything which is said, whispered or gesticulated about me. Of course that also leads to me sometimes seeming insensitive or ignorant. There are people who claim I am arrogant. That makes me sad because I do not want to be that. But nevertheless I prefer to not be understood by a few, than to just react to what happens around me.

In many previous interviews you have referred to a film which you have written yourself. What has become of these plans?

That is a story which is still waiting for a resolution.

Have you ever thought about writing a musical, which after all combines both music and acting?

If there is something I don't especially like, then it is the "musical" genre, I love opera, I love the combining of word, picture, dramaturgy, light, sound and have often thought about writing an opera. But it is like film with me. It is one of the things which remind me that I have not yet fulfilled all my dreams and visions.

America, Egypt, West Africa: where do you think the road will lead you next?

Well, on 29th we set off to Romania and then I am looking forward to the concerts in Germany, Austria and Switzerland. Over and above that there are plans, but I like to talk about dreams and plans only when they are concrete; at best not until I have realised them.

Thank you for the interview.