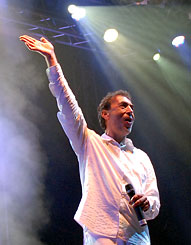 in order for something new to develop, something has to be able to come to an end too.

the harbour festival in linz was a worthy ending to our journeys down to the black sea, up to the north sea and back again.

as we sang schluss, aus, vorbei together with wolfgang niedecken, xavier naidoo, konstantin wecker and willi resetarits shortly before midnight on 5th july, a life chapter came to a close. for four long, though also entertaining years we gave ourselves up to the concept of sailing a stage ship across europe, looking for meetings with musicians, establishing ties, forming friendships.

leaving all that behind us was only really bearable because the open air season lay before us and we were able to look forward to the many concerts that were ahead.

the ultimate finale took place in ischl. on three consecutive nights: the 12th, 13th and 14th august, in the lehár theater, that unique old theatre auditorium, unparalleled in atmosphere and intimacy, we once more played the music that had led us together with so many people across Europe.

the live album haut und haar gives you the chance to experience what happened at least acoustically at our concerts. and because it's easier to say goodbye when there is the prospect of new adventures, I will be going on tour again in 2011/12 with a new programme, which will develop in the meantime.

of course two years is a long time and god knows (or not) what fate intends for me. but that's the plan in any case.