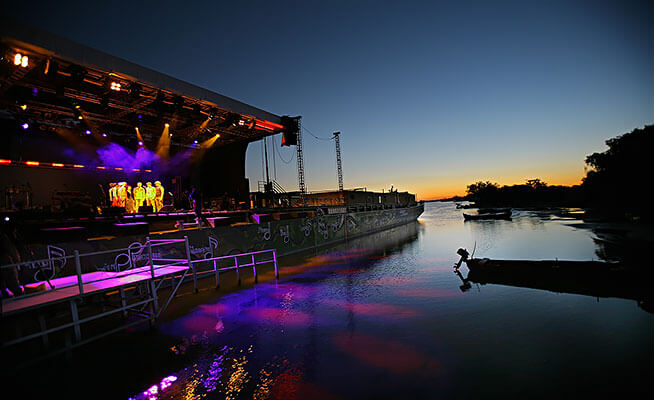 The 77x12 metre barge came from Oltenita in Romania and was bought by the Brandner company in 1992. Once in Austria it was When it arrived in Austria the barge was furnished with aggregate, painted and spruced up once more. Before the Linz Europe Tour it was primarily used for transporting sand and gravel. The barge has been used many times for outstanding cultural events.

In 2007 Brandner and Hubert von Goisern came to an agreement: the barge would become the heart of the Linz Europe Tour 2007-09. A unique concert ship with a hydraulically adjustable stage construction and all the elements needed for a fully-fledged stage show was developed.

In 2008 the concert barge was adapted in the Linz boat yard for the new challenges it would face on the western waterways and canals. A bow thruster was fitted and extra containers were installed as living quarters. The barracks ship that had been part of the flotilla during the first year of the tour had to be done without, as it would have had to have been uncoupled in the numerous canals and along the narrow Neckar. On and below deck people were brought a little closer together; musicians, technicians, visual engineers, cooks and the nautical team were a total of 26 people.

The MS Wallsee was the concert convoy's tugboat at the beginning of the Linz Europe Tour in 2007 and will be used for the 2008 tour.

Originally called the MS Erdberg, it was acquired in 1964 by the Upper Austrian shipping firm Brandner and christened with the name MS Wallsee – home town and port of the Brandner brothers.

One specification of the 29x5 m MS Wallsee was the extremely high traction power it had in comparison to other tug boats. In the mid eighties it was renovated.

As its name suggests, the barracks ship offered accommodation for artists, technical personnel and the project team. During the journey the team made themselves comfortable in a space of 33m x 6m. The ship was the youngest in the convoy and first joined the Brandner family in 2005. 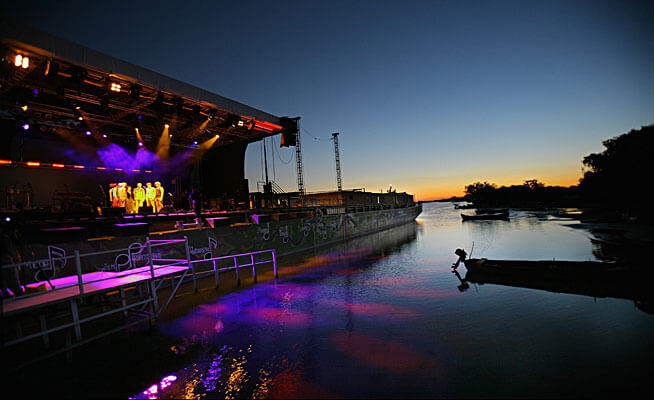 The playing area of the stage was approximately 119 square metres, with headroom of six metres. Since the concert ship had to pass beneath various bridges on its journey, the whole stage roof construction was able to be moved hydraulically from a minimum of 5.3 metres to a maximum of 12 metres above the water level. Either side of the stage two portrait LED walls were integrated into the stage design.

Lights, visuals and projections worked in dialogue with the artists on stage. In 2008 pictures from the previous year told the story of the first stage of the Linz Europe Tour 2007-09.

Wolfgang Spannberger was master of a sound deck he designed and constructed himself. The PA equipment (power amplifiers, performance amplifiers) combined the advantages of partial array with those of a Horn system. All the microphone inputs were digitalised and processed, distributed and recorded with LOGIC Pro.

The light engineering for the Linz Europe Tour 2007-2009 was the creation of Hans Duchan. The lighting equipment was a mixture of conventional incandescent lights (PAR, ACL), film and theatre spotlights (Fresnel lens, Profiler) and manoeuvrable HMI lights. Special lighting such as tube lights, light balloons and hazer lights and more were also used. Hans Duchan controlled the digital dimmer via a wireless DMX.

The stage design was put together by Christian Fahrner and the well-known photographer and projection artist Fritz Fitzke. Together with his team - Lisa Malle, Philipp König and Dirk Pfeifer - Fitzke also conceived the visuals of the Linz Europe Tour 2007-2009.