Of Goisern and people

A bard, a populist and shoes for eternity. How Bad Goisern shapes its sons. 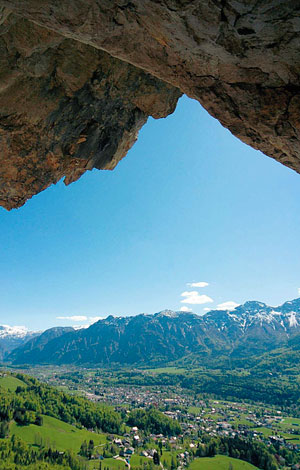 Goisern, Goisern
it's a shame every time
I must return to you
otherwise I just can't take it

On the Halleralm above Bad Goisern sits the man who bears the name of the town, he says: "I used to have the feeling that this valley had spat me out. Nowadays I can well imagine growing old here. This is a good place to reflect." Hubert von Goisern, alpine yodeller, songwriter and world musician, sits on a wooden bench and seems very relaxed. He doesn't look his 56 years, only when he smiles does his face wrinkle. A stream bubbles, the birds are chirping and beyond the alpine meadow with its yellow flowers, a dark forest stretches to the Hallstättersee. Behind the Dachstein glaciers sparkle above the valley. Bongo the dog lies on the ground in the sun.

Hubert von Goisern is one and Jörg Haider is the other famous son of Bad Goisern. And it is interesting how such a small town in the inner Salzkammergut can bring forth two such different characters. For Haider, two years older than Hubert von Goisern, in his conviction as a right wing populist politician, can be seen as the exact opposite of Hubert von Goisern. And yet Jörg Haider grew up in Bad Goisern too, breathed the same mountain air and went to the same primary school. To answer this question one must head to the mayor and the shoemaker of Bad Goisern. The road leads to the middle of the town. And here is everything that befits a town like Bad Goisern: next to the church is the bakery, next to the school the tourist office, next to the ice cream parlour "Boutique del Gelato" is the sports shop, next to the chemist "Edelweiß" is the bank. On the Marktplatz women are selling daisies and the children who are jumping around here say "Griaß di" (Hello) and "Pfiat di" (Bye) with big eyes. The mayor of Bad Goisern is called Peter Ellmer and is a man you can call smart in his traditional lederhosen. Ellmer is a member of the SPÖ (Austrian Socialist Party), which forms the majority in the other three municipalities in the valley, Gosau, Hallstatt and Obertraun, as the area is mostly working class, due to the salt mines. "This is the Red Canyon here", he says.

When he hears that the story is about Jörg Haider and Hubert von Goisern - and the chasm that lies between them, he thinks for a moment and says: "People here have always lived well, they were not rich, but always very confident. I think it is from this basis that the revolutionary attitude and creativity for which our town stands arose." Hubert von Goisern is, just like Jörg Haider, just such one of these personalities with self-confidence. And even if Bad Goisern is still shaped by nationalism and the past, someone like Jörg Haider, with his body of thought, would never have grown big here. That is why he had to leave. In the town people still remember how, when he was already provincial governor of Carinthia, Haider once came back to Bad Goisern, wearing a white suit and white shoes and gave great speeches - many say that he still hasn't been forgiven. In contrast Hubert von Goisern has always remained down to earth and "has become a trademark like the Goiserer shoe," says the mayor.

Meanwhile Hubert is the best promotion for the town, not least because he also expresses the philosophy of Goisern with his music: "Don't conserve, but don't forget tradition nonetheless."

Goisern, Goisern
You give no peace
Your mountains and your meadows
They simply belong
To me

The Goiserer shoe leads to another original, the shoemaker Rudolf Steflitsch-Hackl, the "Shoemaker von Goisern" as he calls himself. Steflitsch-Hackl is a slender man in a green work apron with a sonorous voice. And anyone who orders "made-to-measure, hand-finished and twice stitched" shoes will have to wait 12 to 14 months and pay at least 700 Euros for them. "The Goiserer," Steflitsch-Hackl explains as he leads the way through the workshop, "was invented by my grandfather and today this shoe is famous the world over - more famous than Bad Goisern." In a dark room two men sit on stools, pulling threads through half-finished climbing boots and brogues. It smells of leather. The shoes' fame lies in the fact that about a third of the customers are famous. Arnold Schwarzenegger has a pair of Goiserers, Edmund Stoiber, the whole Strauß family and even the Sheikh of Dubai has a pair. The shoemaker measured these feet too. Just like he measured the feet of Jörg Haider and Hubert von Goisern, who are also among his clients. And all that from family connections. Because both Jörg Haider's father and Hubert von Goisern's grandfather once worked in this workshop.

From the shoemaker to "Moserwirt" again and taking a left there into the alley you end up heading up towards Lasern. A few hundred metres above the farm houses that are strung together here the rocks of the Ewige Wand and Predigtstuhl rise above. One of the old farmhouses has dark green shutters with red hearts. Here lives Haider's 89-year-old mother Dorothea Haider. Before meeting I was told that she would immediately end any conversation about her son that became "ill-natured".

Now the elderly lady sits in her house at a wooden table covered with a heavy tablecloth and dried flowers on top and tells affectionately of "our Jörgi" and says: "You can't say anything about the people of Goisern." They are all as capable and nice as Jörg. She can still remember his childhood in Bad Goisern exactly: "He often went shopping for the neighbours and fetched the papers." Jörg looks out from behind her, standing in a heroic pose in a photo.

Yet Jörg left the valley after his school exams and a year in the military, studied in Vienna, became politically active and in 1989 rose to Governor of Carinthia, where he has lived ever since, she says and blinks through her glasses. Does Jörg still stand by his homeland? The answer comes quickly and seems a little indignant: "Of course he still stands by his homeland."

Somewhere else
Is often enjoyable for me
But then quite unexpectedly
Something suddenly stirs in me
And back, back I must come to you

Hubert von Goisern has travelled a lot in recent times. He has travelled the Danube from Linz to the Black Sea with a concert ship and given concerts along the way. Back he came with so many new ideas that he went straight into the studio with his band to record a new CD. It bears the title S'NIX and has recently been released.

And now Hubert, as the man who is actually called Hubert von Goisern is called in Bad Goisern, is back in his homeland. And enjoying it, strolling the streets and chatting to people, who ask him whether tickets are still available for his concert. Next Saturday Hubert von Goisern will be playing in Bad Goisern again for the first time in four years - and presenting the twelve new songs to his homeland. Up on the Haller Alm he says: "It has become a louder and more poppy album. I hope I won't frighten the people here too much. But I can't play folk music for ever." And smiles.

Another Goiserer original is Toni Rosifka, who for four years has lived high up at 2063 metres above sea level in a wooden hut on the south side of the Krippenstein peak. He wears a knitted cap over his his long dark hair, streaked with grey as well as sunglasses that are held together in the middle with silver sticky tape. The 62-year-old is a mountain guide and has seen the mountains of the world. But Toni Rosifka returned here in the end too. "You have everything here: the lake, the forest, beautiful hiking trails, a quantum of freedom, glaciers, peaks and climbing walls thousands of metres high." The Dachstein is simply the perfect mountain." He knows exactly what he is talking about. For 27 years he was landlord of the nearby "Simonyhütte", from where he led countless customers up to the Dachstein peak. "I counted up one summer," he says, "I went up there 67 times."

One day in summer 1992 Hubert von Goisern came to the hut and said that he had recorded the song Koa Hiatamadl with a band called the Alpinkatzen. "I saw immediately that this was someone who was authentic. That was fine", Rosifka remembers. Then on a whim they made a bet: if the album Aufgeigen stått niederschiassen went gold, then he, Toni Rosifka, would lead the whole team, including band and management, up to the 3004m Dachstein peak. "Then the time came in November," says Toni Rosifka and laughs a laugh that sounds like Barney Geröllheimer: a very jolly and hoarse series of hee-hees. On the stairs of the "Simonyhütte" he and his mountain guide team practised safety techniques with the group. "We were up on a metre of new snow. But we got everyone up and down again. Twenty people who were almost all without mountain experience." Toni laughs his Geröllheimer laugh once more.

Hubert von Goisern returned to the Dachstein nine years later, to the Krippenstein to be precise, where Toni Rosifka now lives. There stands not only the lodge, but also the "Krippenstein" mountain hotel, a large grey block, which houses the mountain cable car station in its lower floor, but has otherwise been empty for years. In these rooms von Goisern and his band at that time recorded the CD Trad II, which, like the CD Trad, consists of interpretations of the traditional songs from the surrounding valleys. One of the songs is called Abend spat and only when he had recorded it in the mountain hotel did Hubert von Goisern discover that it was Adolf Hitler's favourite song. Hubert von Goisern says today: "When I discovered that it was just one more reason to do it. You can't surrender it to these people. A beautiful song can't do anything about being liked by somebody you don't like." He speaks slowly, thoughtfully and then says: "Apart from that, music is much greater than politics can ever be."